Never Too Late... and kick down the castles... 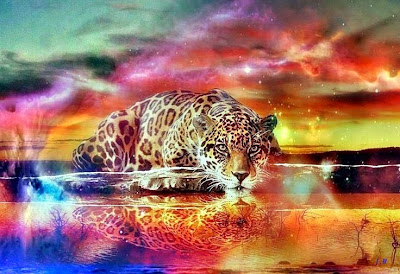 Late night mews, puddle-jumping adorable Big Cats... yes, more rain this evening... and the ground is soggier than the Kougaress has seen in long while... except for the year the sky remained gray, and  it rained nearly everyday in the summer, and there was local flooding... in truth, the tame prairie does need this amount of rain... this Big Cat just hopes it doesn't turn into flooding, and become too much of a good thing... and that reminds... bless ALL in Texas, Oklahoma, and other rainstorm-saturated states, and areas... this Big Cat looked at the photos of the terrible flooding in Houston... so unbelievably sad, and definitely catastrophic.

Take care, darling kittens. Don't get those paws too wet, and be careful out there. 'Cause the world is going more madly insane. But remember, this Big Cat loves ya!
~~~~~~

...kick down the castles...
By Savanna Kougar

Again, since my writing time is so limited these days, here's another sneak peek from a raw, 'unedited' chapter of my SHAPESHIFTER SEDUCTIONS WIP -- starring my winged horse heroine, Keina, and her more-than-human hero, Drev. Right now, they are enjoying Thanksgiving day together, and are dining in Drev's 'out of the way' survival cabin home. ... oh, and they're learning more about each other.

"Dressing in my world often reminds me of the actors in your movies. They dress the part."

Drev gave a nod, then asked, "No movies in your world?"

"No movies. We have entertainment venues and theatrical plays, which most often depict our history. Perhaps, it is because we have viewing crystals."

Never Too Late
by Pat Cunningham

"Happy birthday to me," Sandra sang bitterly to herself while she cruised her aging Toyota up Route 15. Today, at precisely 5:14 p.m., she would turn thirty-six. She had a career of sorts—manager of one of the chain motels at the Talbot's Peak exit—and a comfortable if uneventful life. All she lacked was someone to share it with.

Countless blind dates set up by well-meaning friends, an endless circuit of the limited bar scene, and one disastrous incident stemming from an online dating site had finally convinced Sandra her personal Prince Charming must have taken a different ramp off the interstate. Once a girl passed thirty, statistics said she stood a better chance of being shot by terrorists than she did of finding a man. No handsome stranger was going to ride up on a white horse and sweep her off her feet.
~~~~~~

NO THANKS!!! HUMANITY IS BETTER THAN THIS CYBORG CRAPOLA 'NEWS' ~

Humans 'will become God-like cyborgs within 200 years'
Tuesday, May 26, 2015
The amalgamation of man and machine will be the 'biggest evolution in biology' claims Professor Yuval Noah Harar. — The Telegraph
~~~~~~

PARANORMAL AS A HOBBY 'NEWS'

Paranormal investigations a fast-growing hobby
Tuesday, May 26, 2015
An increasing number of professionals are signing up for courses and training in paranormal sciences from a host of institutes that have mushroomed across India. — Hindustan Times
~~~~~~

WONDERING IF THERE IS SOMETHING NEFARIOUS HERE? 'NEWS' ~

Homicide probe to be launched into BB King’s death
Reuters | Daughter: “I believe my father was poisoned and that he was administered foreign substances.”
~~~~~~

Drone Crashes, Hits 2 People During Marblehead Parade
WBZ-TV | A drone flying above a Memorial Day parade crowd lost control, crashed into a building, and landed on a man’s head.
~~~~~~

Before You Buy That Rothko…How the CIA Covertly Nurtured Modern Art as a Cold War “Weapon”
Michael Krieger | For decades in art circles it was either a rumour or a joke, but now it is confirmed as a fact.
~~~~~~