...on the final stretch... The Mountain Lion King 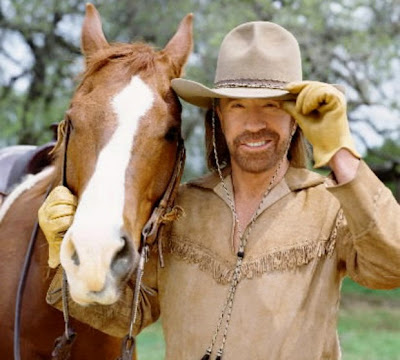 Chuck Norris, not just a film and TV star... he walks his talk, and says "Don't mess with Texas."

Just after midnight mews, splendiferous and spunky Kitkats... so, the storms are threatening the tame prairie... so far just some rain and thunder... who knows if it will fully hit or not... anyway, on her trek down to the mailbox the Kougaress heard two military jets scream by, both of them flying south... also, the butterflies were out in force today, the gorgeous little critters, they do love that clover... oh, and this Big Cat saw a couple of bees too... and she even got a bit of yard work down, including clearing away some lower fir tree branches that were crowding some beautiful purple Iris... oh, and the Kougaress did have a minor emergency with a beloved pet... but, thank goodness!!! it all worked out okay... except now her energy is drained... such is life.

Stay hunker-bunkered down, and watch out for each other, darling kittens. Lots of world-stage fireworks likely coming up. Just remember, this Big Cat loves ya!
~~~~~~

So, the Kougar got some good writing done on Keina and Drev's love story, and is about to start Chapter Twenty-six. But she needs more time and energy, per usual.  Gosh, she'd sure like to get more of her WIPS written.

Looks like our own Pat Cunningham at SHAPESHIFTER SEDUCTIONS is on the final stretch of getting her latest, THE MOUNTAIN LION KING, self-published. This Big Cat can't wait! For Pat's blog on her progress go to TITLE MAGIC ~titlemagic.blogspot.com~
~~~~~~

EVER BEEN KISSED BY A LION? BIG SMILES 'NEWS' ~

The Hug of the Century:A woman found a badly injured lion in the forest. She took it with her and nursed it back to health. When it was better, she made arrangements with a zoo to take the lion and give it a new and happy home:AMAZING AND LOVELY! http://www.vitality101.com/Fun/lion-kisses-rescuer
~~~~~~

EVEN THOUGH SHE'S COMMITTED NO CRIME, THIS IS ONE REASON WHY THIS BIG CAT WON'T EVER BE USING ANCESTRY.COM... IT DOESN'T MATTER WHAT PRIVACY THEY PROMISE, IT'S ULTIMATELY A LIE... AND TO TOP IT OFF, THIS GUY IS INNOCENT... AND LOOK WHAT HE HAD TO GO THROUGH 'NEWS' ~

Is this really Tinkerbell caught on camera? Mother believes winged figure she captured in photo is a fairy (and so do her two young daughters) She has always believed in fairies but now a mother-of-two says she has found evidence the magical creatures exist.
Lisa Wildgoose was taking photographs in the ancient Bluebell Woods near Towcester, Northampton, when she captured the amazing image.
It appears to show a tiny winged figure hovering near a drooping bluebell, and when enlarged it looks like it has blonde hair and shiny shoes.
~dailymail.co.uk/news/article-3070077/Is-Tinkerbell-caught-camera-Fairy-fan-believes-s-captured-image-magical-sprite-amazing-picture.html~
~~~~~~

The Biggest Military Hack Ever Exposes NASA Secret ‘UFO Files’ But what did McKinnon find?
McKinnon had heard that information about the existence of extraterrestrial visits was being hidden from the public, and that pictures from space were being altered at NASA’s Johnson’s space center; UFOs were allegedly being taken out of pictures.
When he hacked into Johnson’s systems, he found a high definition picture of a large cigar-shaped object hovering over the northern hemisphere. When he hacked into the systems of US Space Command, he found a log that listed non-terrestrial officers… which he believed was evidence that the US military has a secret battalion in space. Some of these logs were ship-to-ship transfers; the USSS LeMay and the USSS Hillenkoetter were the names he saw on the transfer logs – USSS stands for United States Space Ship.
He said, “I found a list of officers’ names … under the heading ‘Non-Terrestrial Officers’. It doesn’t mean little green men. What I think it means is not Earth-based. I found a list of ‘fleet-to-fleet transfers’, and a list of ship names. I looked them up. They weren’t US Navy ships. What I saw made me believe they have some kind of spaceship, off-planet”. ...Is McKinnon being made a scapegoat?
In 2005, McKinnon told the Guardian, “Once you’re on the network, you can do a command called NetStat – Network Status – and it lists all the connections to that machine. There were hackers from Denmark, Italy, Germany, Turkey, Thailand… every night for the entire five to seven years I was doing this”.
Are the governments really suppressing antigravity, UFO-related technologies, free energy or what they call zero-point energy? Was McKinnon right in taking the illegal route to expose the secrets being kept?... ~anonhq.com/biggest-military-hack-exposes-nasa-lie-ufos~
~~~~~~

PORTALS AND THE PARANORMAL PAST REVEALING ITSELF 'NEWS' ~

Portals Are Opening Up Across The World - Doorways, Discoveries, And Deceptions-MY INTERVIEW WITH TOM HORN,CHRIS PUTNAM LAST NIGHT ON HAGMANN AND HAGMANN ~allnewspipeline.com/Portals_Opening_Up_Around_The_World.php~
~~~~~~

Has a sixth DNA base been discovered?
By Tim Sandle     yesterday in Science
Most textbooks talk of four DNA bases. Later research has shown there to be five. No, wait, cross that out, there could be six. Scientists suggest that the methyl-adenine is the sixth base and that it is medically important. ~digitaljournal.com/science/has-a-sixth-dna-base-been-discovered/article/432550~
~~~~~~

After months of R&D work, I'm now able to share that I'll soon be launching the world's first anti-propaganda search engine.
Independent Media rejoice! All the voices of truth and courage will receive top rankings in this new search engine that filters out corporate propaganda and government disinfo:
~naturalnews.com/049591_anti-propaganda_search_engine_independent_media_corporate_disinfo.html~
~~~~~~

Facebook will now track users' finances in addition to social contacts, employment, health status, political affiliation
(NaturalNews) In its bid to become the provider - and tracker - of all things to all humans, Facebook has announced that it is entering the peer-to-peer money transferal market. The initiative is meant to rival PayPay, and it revolves around Facebook's...
~~~~~~

FTC caved to corporate pressure from Google - released documents reveal cover-up
(NaturalNews) Years ago, when Larry Page and Sergey Brin launched a little search engine they called "Google," no doubt they were thinking big. But surely they could not have envisioned that someday, their company would grow to be so rich and powerful...
~~~~~~

THE GOO-BORG'S PREDECESSORS ... THEY LOOK INNOCENT ENOUGH, DON'T THEY? 'NEWS' ~