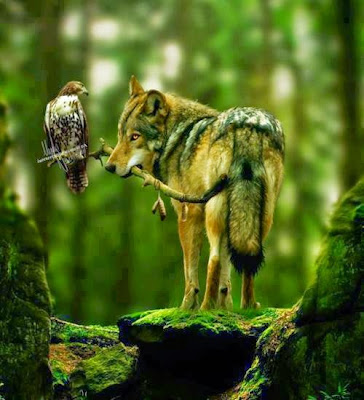 Nighttime mews, almost-summer running Kitkats... so, the temps are on the cool side now, and going down into the mid 40s tonight... a bright sunny day on the tame prairie... but the last few days have been off-and-on rainshowers, with one significant downpour... and wow, the vegetation has already gone green-wild, and this Big Cat is rolling in white and red clover... the clover flowers this year are extra big and beautiful... so, given her current time restrictions, the Kougaress has some decisions to make... the last few days she's just been too crazy-busy and worn out to spend time on her blog.

Be that as it may, most darling kittens, time to get mentally tough for the times ahead. Just remember, this Big Cat loves ya!
~~~~~~

Also, the Kougar penned Volcano's Weekly Angelic Forecast... which is posted at Kougar Kisses below, and at these two sites ~ sirenbookstrand.blogspot.com & ~ titlemagic.blogspot.com ~
~~~

Trust Me...
by Serena Shay

Penelope walked along the front of the room, her fingers slid, first, along the smooth wood of the massive cross, remembering a naked Burgess and the first time she tied him to it…

“So, let me get this sorted, you intend to tie me to this cross – naked – then whip me bum?” the look on his face was one of interest.

“No, my blue-haired penguino, I’m going to cuff you to the cross, with the softest leather cuffs.  Then I’m going to flog you first, and follow it up with a crop that will make your ass tingle in the nicest of ways.”

And the sign read “Thongs Required”.  Gill swallowed hard, looked over his shoulder to where Vernon McMahon, Louie, and several others from the Peak stood buck ass naked.  Even their wives and girlfriends sat back on the beach nude.  Who the hell had put up a sign bearing such?

“How do we comply with this?” Louie asked moving forward.  “I mean it’s a nude beach.  It’s not like we’re going to have those stuffed in a back pocket.”
Vernon clapped his hand over his mouth.  It didn’t do much good.  Gaffs of laughter spilled out.  Gill watched Phil walk up to the sign point at it and then boldly give it the finger.  The bird as some referred to the middle finger cheer many humans used as they drove down the highway of life.

The flash scene well dried up in the wake of my self-published release of The Mountain Lion King last week (shameless plug), so here's the beginning of an M/M I'm fooling around with for an anthology featuring alphas behaving badly. In this case, there are two of them. Since they're both shapeshifters and this is a shapeshifter blog, I figured what the heck.

The smell of hot fresh blood got Declan up and moving again. He took a step and bit his lip against a whine of pain. He needed meat. Given his injuries, there was no guarantee when he'd be able to make a kill on his own. Right now even the chance of regaining human form was iffy.
~~~~~~

Friday May 15, 2015
Brigid: Goddess, Saint, Voodun Diety
There is almost no sane, truthful information in the general media about modern Wicca and its deities, so this week we delve deeply into the story of the Celtic Goddess Brigid, mother, daughter, healer, warrior, goddess of magic. We talk to Courtney Weber, priestess, author, activist and practicing witch in New York City. You can find her on TheCocoWitch.com and WitchesandPagans.com.
In the second half of the show, we learn about Courtney's amazing discovery of the presence of the goddess Brigid in her life, and how it changed her forever. She was literally slapped around, forcefully awakened and brought into a new level of spiritual intensity.
We also explore spells, blessings and ritual practices that offer harmony, protection and much more.
This show is a journey into a religion that is ceaselessly persecuted in the media and entertainment by being portrayed as frightening, malicious and evil. The persecution of witches is an ancient, worldwide phenomenon. It is also wrong, both spiritually and morally. Listen to Courtney Weber and find out what's right about her faith and it's profound connection to the Earth and its powerful spiritual identity as the mother of us all.
~unknowncountry.com/dreamland/latest~
~~~~~~

Government Whistleblower Claims a Massive UFO Fleet Is Hiding Behind The Moon
A man who claims to have worked as a consultant for both NASA and the NSA gave a series of mind-blowing statements.
For the past 12 years, Dr. Eric Norton has been an outside consultant for NASA and the National Security Agency (NSA) and his job description included keeping an eye on celestial threats such as asteroids and comets. But in January 2012, Dr. Norton saw something much more menacing—a massive fleet of extraterrestrial craft heading straight for our home world. ~beforeitsnews.com/paranormal/2015/05/government-whistleblower-claims-a-massive-ufo-fleet-is-hiding-behind-the-moon-2489110.html
~~~~~~

Spiders fall from the sky in Australia
Saturday, May 16, 2015
Arachnophobes be warned: it is (allegedly) raining spiders in Australia. — The Independent
~~~~~~

Texas teen says he saw Jesus before being revived
Saturday, May 16, 2015

Doctors can’t seem to explain it, but one Texas family is sure it was the hand of God that brought their son back to life. — CBS Dallas Ft. Worth
~~~~~~

'Living' concrete heals itself when it comes into contact with water
Saturday, May 16, 2015
Say goodbye to potholes... a microbiologist has developed a self-healing concrete that mends cracks using bacteria. — Mail Online
~~~~~~

THEY COULD ALSO ARRANGE ACCIDENTS... YOU KNOW, HACKING 'NEWS' ~

US pushes pedal on car-to-car communication
Sunday, May 17, 2015
Engineers have known for some time that if cars could only "talk" to each other, they could avoid a lot of accidents. — Discovery News

GEE, COUNT THIS BIG CAT AMONG THE WORRIED 'NEWS' ~

Military pushes for emergency robots as skeptics worry about lethal uses
Sunday, May 17, 2015
A Pentagon contest of robots for rescue missions fuels imaginations — and anxiety — about the future. — Washington Post
~~~~~~