Witch's Moon... The Countdown Has Begun! 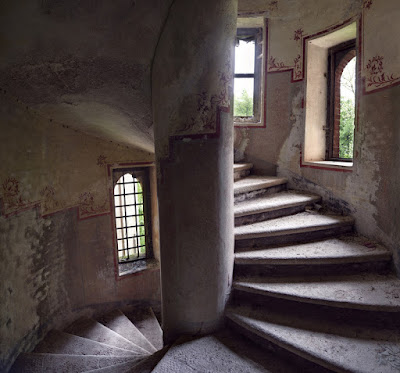 Exploring Italy's Abandoned Castles, Towers and Hospitals
Wednesday, May 27, 2015
As the man behind the camera at Forgotten Heritage Photography, Matt Emmett has ventured into abandoned buildings of every stripe. ~atlasobscura.com/articles/forgotten-heritage-italy~
~~~~~~

Very early morning mews, rainy day kittens... no flooding on the tame prairie, but definitely soggy-wet, and the little creek is running high, especially with the rains this afternoon... bless all those people in the catastrophic flood areas, this Big Cat so feels for them... may the Divine help and bless them.

So, the Kougaress was trekking back from her mailbox day before yesterday... and she spotted this weird cloud in the sky north of her... there were some streaming clouds nearby, but mostly the sky was clear... that is, except for this sort of a roundish cloud... it wasn't white like cotton puffball clouds... no, it wasn't a mashed potato, cumulus cloud like this Big Cat saw in her youth... this thing was a dirty grayish color, and had these poking-out formations on it... it's really difficult to describe... but sort of like a dirty gray-mist ball with some lumpy protrusions, and it wasn't moving anywhere... this was definitely the weirdest cloud the Kougaress has ever seen... to date, anyway.

Take care, and keep sharing the love, most darling kittens. The times are about to become even more explosive... so head's down and head's up. And remember, this Big Cat loves ya!
~~~~~~

The Countdown Has Begun!
by Rebecca Gillan

Quick hit-and-run post today. Life is all kinds of nuts at the moment. But there is good news on the "Witch's Moon" front.
~~~~~~

FDA pulled the Rug Out From Under Pet Food Consumers
Susan Thixton - The one thing FDA did to help consumers know the difference between a pet feed and a pet food is gone - without warning. FDA has left us absolutely defenseless against marketing lies of pet food. Over this past weekend, I received a tip that FDA has ended the pet food human grade ingredient verification process (known as FDA Letter of No Objection). This devastation to pet food consumers was confirmed yesterday by the Pet Food Committee of AAFCO. (Questions were sent to FDA, more than 24 hours ago – they have not responded.)

Profile of Jim Marrs
Wednesday, May 27, 2015
The bestselling author and investigative reporter has been at the forefront of the movement to reveal America's hidden history for decades. — PopMatters
~~~~~~

Is This a 1.7-Million-Year-Old Man-Made Bridge?
Wednesday, May 27, 2015
According to legend, King Rama built a bridge between India and Sri Lanka more than a million years ago-- do NASA satellite images show possible remnants? — Epoch Times
~~~~~~

Got a wearable? Almost anybody can track you using simple technology
PandoDaily - Wearable products need to transmit data to function. Many don’t work without a connection to a smartphone. And because it would be silly to walk around with a cord between the devices, that connection is made via Bluetooth Low Energy. Context Information Security has found that these connections can be used to identify smartwatches, fitness trackers, and other products that rely on BLE. And they’ve released an Android app that can track these signals to prove it. Here’s how Context’s Scott Lester explained the issue to Help Net Security: ‘Using cheap hardware or a smartphone, it could be possible to identify and locate a particular device – that may belong to a celebrity, politician or senior business executive – within 100 meters in the open air. This information could be used for social engineering as part of a planned cyber attack or for physical crime by knowing peoples’ movements.’
~~~~~~

ALL THE BIG EMAIL COMPANIES ARE SPYING ON YOUR EMAIL... SOMEONE IS GOING AFTER YAHOO IN PARTICULAR 'NEWS' ~

Killer Robots Will Leave Humans “Defenseless” In the Very Near Future
Joshua Krause | You read it in the comment section of every article that is critical of the government, sometimes on this very website.

UC Berkeley Builds Robot That Can Learn All by Itself
Joshua Krause | One of the arguments in favor of automation, is that even though robots will take our jobs, surely they will replace them with better jobs.
~~~~~~

Watch moment ‘self-driving’ car ploughs into two men as auto-brake feature fails
London Evening Standard | This is the moment an accelerating car rams into two men who were apparently expecting an auto-braking system to kick in.
http://www.prisonplanet.com/watch-moment-self-driving-car-ploughs-into-two-men-as-auto-brake-feature-fails.html
~~~~~~