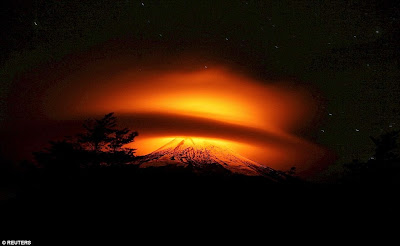 PHOTOS
Apocalyptic skies return above Chile after second volcano erupts and entire landscape is bathed in blood red
More astonishing images of a volcanic eruption have emerged from Chile, this time from Villarrica in southern Chile
Villarrica, located around 460 miles south of the capital Santiago, is among the most active in South America
Britain's Met Office said that the clouds wrapped around the volcano are lenticular clouds, often mistaken for UFOs
By Ted Thornhill for MailOnline ~ Published: 10:52 EST, 19 May 2015
http://www.dailymail.co.uk/news/article-3088077/Apocalyptic-skies-return-Chile-second-volcano-erupts-entire-landscape-bathed-blood-red.html
~~~~~~

Late afternoon mews, *Romping Through May Flowers* Felines... gloomy skies, within rain on the way, possibly... and it's still unseasonably cool on the tame prairie... so, since this Big Cat can no longer keep up with penning her bloggie for several reasons, she's resorted to simply doing the best she can... here's hoping you have a good and wonderful weekend celebration... and remember those who truly sacrificed for freedom.

Keep your head down, and your heart available, most darling kittens... more not-fun stuff coming down the pike real soon. Prepare to duck and cover emotionally. And remember, this Big Cat loves ya!
~~~~~~

"I don’t want to buy books from Amazon anymore!
...I wanted to build something that doesn’t compete head-on with the Amazon machine, but embraces it, augments it and nudges you towards the local option to buy.
The Bookindy Google Chrome extension gives you the price of the book in your local bookshop whilst browsing Amazon. Bookindy embraces Amazon’s well-ordered and familiar catalogue for browsing and allows you to buy the book from your local independent bookshop shop if you want to... "
http://www.thepassivevoice.com/05/2015/i-dont-want-to-buy-books-from-amazon-anymore
~~~~~~

Check out this video from 5/21/15 guest Marshall Masters, which features curious live news footage from KCRA in Sacramento, CA in which the anchors report an observation of a planet they can't explain. Masters believes what they were observing was Venus eclipsing Nibiru (Planet X). ~coasttocoastam.com/pages/video-venus-eclipses-nibiru~
~~~~~~

Boy Scout Pansies ... this Big Cat fiercely enjoyed water gun fights, and she was darn good at it... and still is!!!

THAT'S RIGHT, RAISE A BUNCH OF PANSIES WHO COULDN'T SURVIVE IN THE WILDERNESS OR IN THE WORLD, IF THEIR LIFE DEPENDED ON IT 'NEWS' ~

Boy Scouts Banned From Water Pistol Fights Because They Involve “Simulated Firearms”
Steve Watson - Boy Scouts In the US have been all but prohibited from engaging in water gun fights and water balloon tomfoolery by scouting officials citing a lack of kindness in the activity. Water pistols and other toys such as rubber band guns and potato guns have been banned for anything other than target practice, and “eye protection must be worn,” according to page 99 of the 2015 Boy Scout handbook. The handbook also provides ludicrous guidelines, stating “For water balloons, use small, biodegradable balloons, and fill them no larger than a ping pong ball.”... Former scouts weighed in, declaring the rules, which will apply to hundreds of thousands of scouts, as “out of touch”.
~~~~~~