Full Flower Moon... and WHERE DID THE DRAGON GO? 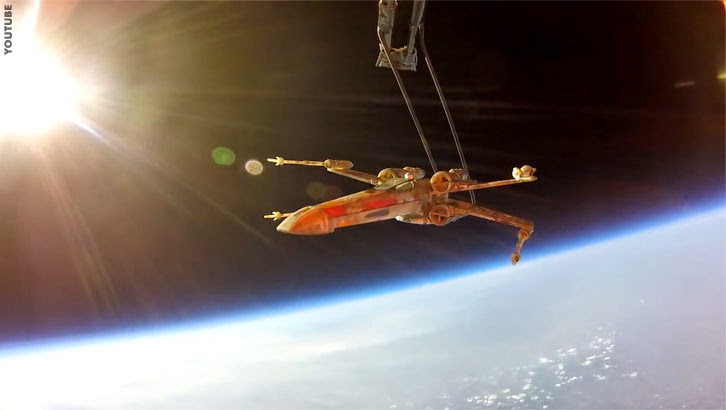 Two intrepid Star Wars fans launched a model X-Wing fighter into orbit using a high-altitude weather balloon. Matt Kingsnorth and Phil St. Pier managed to get their rig to an altitude of 118,000 feet above the surface of the planet, where they captured impressive footage of their model with the Earth and sun in the background. The duo is hoping their stunt gets noticed by director J.J. Abrams and lands them tickets to the premiere of Star Wars: The Force Awakens. More at ~unexplained-mysteries.com/news/280988/star-wars-fans-send-x-wing-in-to-space~
~~~~~~

Late night mews, *Full Flower Moon* Big Cat Beauties... such a lovely image, the thought of a flower moon blazing in the night sky and big cats running playfully in the moonlight... as the Kougaress mentioned, the wild verbena is blooming beautifully, and most splendidly... and there are lots of wild onion plants this year... early this morning, there was huge unexpected clap of thunder... however, only a sprinkle or two of rain... but there could be a thundershower tomorrow... so, it's been a busy, busy day per usual... this Big Cat has to say, she checked out some photos and vids about three planets next to the sun, and she was shocked... yeah, check below for more info on that.

Time to blossom anew, darling kittens. Open your mental and heart petals to the new ways that will now serve you best in life. And let your loving relationships blossom. Be open to new love, also. And remember, this Big Cat loves ya!
~~~~~~

Yep, the Kougar did get some done on Keina and Drev's love story.
~~~

WHERE DID THE DRAGON GO?
by Solara
“GILLL!” echoed through the layers of sleep wrapped around him.  Another shriek and two more loud cries had him on his feet ready to scamper.  Scamper where?

Gill tried to stop the yawn threatening to overtake him when Chloe trotted into the living room holding one of the triplets.  He waved with one hand while rubbing his eye with the other.  Giving into the yawn, he moved toward her.  The look on her face said something wasn’t right.  He reached for Chloe when she spoke.

Did the Victorians find life on Mars? 120-year-old magazines reveal hidden scientific 'discoveries' from canals on the red planet to teaching dogs to read
A genealogist from West Yorkshire found hidden Victorian 'discoveries'
She unearthed the theories in old magazines from 1875 to 1895
They include a man teaching a dog to 'read' and finding canals on Mars
Other articles discuss 'electric plants' and a dinosaur-eating bird
By Jonathan O'Callaghan for MailOnline
Published: 03:17 EST, 1 May 2015 | Updated: 07:19 EST, 1 May 2015
Read more: ~dailymail.co.uk/sciencetech/article-3062893/Did-Victorians-life-Mars-120-year-old-magazines-reveal-hidden-scientific-discoveries-canals-red-planet-teaching-dogs-read.html
~~~~~~

Extraordinary Lights over San Diego
Saturday, May 2, 2015
This appeared over San Diego early in the morning of April 30. It was reported on local news and observed by a number of people. Is it a cluster of LED lights on balloons? A genuine unknown. Apparently it was only visible for a short time. The red, white and blue coloring of the lights suggests a prosaic origin, but, as one of the commenters on the video notes, UFO clusters are becoming more common. For the present, this is an unknown, and a dramatic one.
~unknowncountry.com~

Medieval Fighting Meets MMA in Russia’s Newest Combat Sport
CONTRIBUTOR: Oddity Central. Original article on OddityCentral.com - a blog on oddities and wacky news http://www.odditycentral.com/ While Mixed Martial Arts (MMA) matches generally incorporate striking and grappling techniques from a variety of other combat sports and martial arts, the use of medieval fighting techniques is unheard of. Until now, that is. St. Petersburg...
~~~~~~

Is the internet on the brink of collapse?
UK Daily Mail | The web could reach its limit in just eight years.

Experts predict robots will take over 30% of our jobs by 2025
Sunday, May 3, 2015
Analysts at Gartner predict that one-third of jobs will be replaced by software, robots, and smart machines by 2025. — Business Insider
~~~~~~

Poltergeist drama sees actors spooked
Sunday, May 3, 2015
Actors working on a series about the Enfield poltergeist have reported strange occurrences on the set. — Unexplained Mysteries
~~~~~~

How Music 'Radically' Improves the Brain, Dementia, Alzheimer's
A study shows how serious mental afflictions like Alzheimer's disease can be treated with certain kinds of music.
~~~~~~

ON THE PATH OF THE IMMORTALS–: Angelic Technology And The Doorways Of The Immortals http://skywatchtv.com/2015/05/03/on-the-path-of-the-immortals-part-10-angelic-technology-and-the-doorways-of-the-immortals/
~~~~~~

Mysterious Lake Vostok
Date: Thursday - April 30, 2015
First hour guest, author Steve Alten ~stevealten.com~ talked about the mysterious subglacial Lake Vostok in Antarctica, which is six thousand square miles, and over a thousand feet deep. There is a magnetic anomaly in the lake that has a 65 mile radius-- theories to explain it include a sunken 'Atlantis'-type temple, and the remains of an ET ship. Alten explored the latter theory in his new novel, Vostok [amazon.com/Vostok-Steve-Alten/dp/1681020009/ctoc] (view trailer ~youtube.com/watch?v=tmBKpQBsreo&feature=em-upload_owner~) in which he also incorporated background material on extraterrestrial contact from Steven Greer.
~coasttocoastam.com/show/2015/04/30~
~~~~~~

HOW TO SABOTAGE RELATIONSHIPS 'INFO' ~

Death Of Conversation: 22+ Images Of How Smartphones Take Over Our Lives
~~~~~~