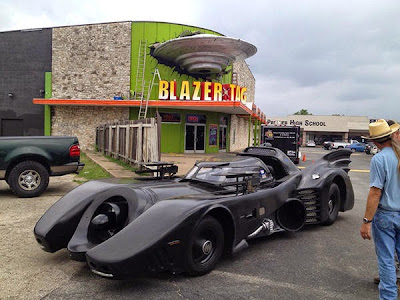 Batmobile Investigates ́UFÓ Crash
A new piece of artwork is being constructed in Austin, Texas. During installation, a man showed up in a real bat mobile to check things out.
--Gregory W. ~coasttocoastam.com/photo/category/artwork-comics-multimedia/#72756/batmobile-investigates-ufo-crash~
~~~~~~

Midnight mews, gorgeous and eye-glittery Felines... so, chilly on the tame prairie these past couple of days... gosh, the Kougaress just can't keep up with her bloggie, and all the critical news happenings in these 'quickening upon quickening' times... it's majorly overwhelming to the point of being mind-numbing and head-spinning... be that as it may, this Big Cat, broke down and purchased a piece of what is called organite from ~thechembow.com~ ... and, she's been feeling noticeable positive vibes.

Anyway, most darling kittens, keep on spreading the love. And keep on preparing for the superstorms of life. 'Cause this Big Cat loves ya!
~~~~~~

So, it's been busy-busy last few days getting Volcano's Angelic Forecast written, then the Tuesday flash scene for SHAPESHIFTER SEDUCTIONS.

Cougar shifter Rick Donnelly has his hands, and his arms, full protecting runaway tiger bride Nilambari. What happens when her vicious husband-to-be comes looking for her?

Ever hear one of those songs that just tickles you no end? Well, that's your flash scene for today. I hope you enjoy.

"A crash course in Earth culture," Kalina muttered, practicing her use of the English language. She waved her hand over the wall-sized monitor, installing the last of the current information gathered from the world wide web, including the depths of the dark net, and all the Q-clearance intel organizations she'd discovered.

Instead of an AI assassin, she'd become more of a bits-and-bytes spy. Entering the cyberworld as frequency consciousness, Kalina hid out, observing the flash and flow of traffic. Whenever lightning-pulses of secret info appeared, she chased the signature-stamped pulses down to source.

The project to save endangered information on the internet had become a serious priority with Dante. Ever since pages he'd saved to his primitive hard drive had disappeared on the net, the alpha werewolf had become a fiend for storing every last cyber-info bit he could get his paws on. To that end, over the last year's time, he'd hired a  growing team of top-predator nerds.
~~~~~~

TURNS OUT COWS CAN HELP SAVE THE PLANET... THEY ARE SACRED, AND HAVE A SACRED PURPOSE LIKE ALL ANIMALS 'INFO' ~

Cows Save the Planet by Judith D. Schwartz ~judithdschwartz.com~

BLURB: "Author of Cows Save the Planet And Other Improbable Ways of Restoring Soil to Heal the Earth. In her book...Judith argues that the key to addressing carbon issues and climate change lies beneath our feet ... Unmaking the Deserts, Rethinking Climate Change, Bringing Back Biodiversity: This is how humans can build agricultural soils and manage cows on grasslands.
~~~~~~

THE LAKES FROM NOWHERE 'NEWS' ~

Africa’s Mysterious Lakes From Nowhere
Tuesday, May 12, 2015
One of the lakes appeared seemingly overnight in one of the places one would least expect a lake to be; in the middle of a searing, parched desert in Tunisia. — Mysterious Universe
~~~~~~

Bloodcurdling noises that inspired TV drama 'The Enfield Haunting' are real says scientist
Tuesday, May 12, 2015
Sounds recorded at the house in Enfield, north London, in the 1970s were analyzed by Dr Barrie Colvin. — EXPRESS.co.uk
~~~~~~

SADLY, THIS CAR, IF YOU LOOK AT THE COMPARISON FACTS, IS JUST A BIG UGLY RIPOFF... BUT BUY AT WILL 'NEWS' ~

The car that runs on FRESH AIR: It hits 111mph and only water comes out the exhaust... no it's not science fiction and you can buy it here soon (if you can afford it)
By Guy Walters for the Daily Mail
Published: 19:37 EST, 8 May 2015
Just imagine that instead of spewing out a noxious mixture of carbon dioxide, carbon monoxide, hydrocarbons, benzene and particulates, your car’s exhaust emitted only water. Yes, that’s right, just good old H2O, in a form so pure you could drink it.
It might sound like science fiction, but it is in fact reality, in the form of a new car that will appear on our streets later this year called the Toyota Mirai.
Instead of being filled up with petrol or diesel, the Mirai (the word is Japanese for ‘future’) is powered by the most common element in the universe — hydrogen.
The gas is inserted into the car’s tank just as you might use a petrol pump, and then, through the wonders of a fuel cell — which produces a chemical reaction between the hydrogen and oxygen in the air — it is converted into electricity, which in turn powers the car. Incredibly, the only by-product of this process is water. ~dailymail.co.uk/sciencetech/article-3074298/The-car-runs-FRESH-AIR-hits-111mph-water-comes-exhaust-no-s-not-science-fiction-buy-soon-afford-it.html~
~~~~~~

FIAT CEO: Apple is planning an ‘intervention’ in the automotive industry
Business Insider | Here’s yet another piece of evidence suggesting Apple is covertly developing an electric car.

The 9 Strangest Flying Robots from the World’s Biggest Drone Show: Here’s a look at some of the most interesting, innovative and outlandish drones Defense In the past year, drones have crashed onto the White House lawn, hauled radioactive cesium to the roof of the Japanese prime minister’s Tokyo office, and swooped above battlefields in Iraq and Ukraine. The future of drone design is an area with huge importance for companies and for the military. At the recent Unmanned Systems 2015 show in Atlanta, Georgia, that future was on display. ~defenseone.com/technology/2015/05/nine-strangest-flying-robots-worlds-biggest-drone-show/112303/?oref=d-topstory~
~~~~~~