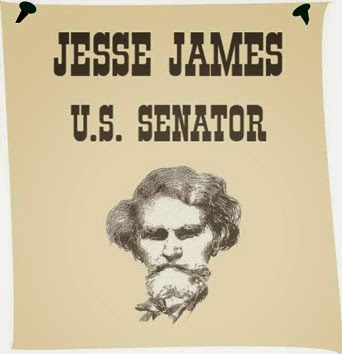 at SHAPESHIFTER SEDUCTIONS ~
Jesse James, U.S. Senator... see below!
Late night mews, Summer-adventurous and amorous Big Cats... the heat and humidity definitely returned to the tame prairie this afternoon... but, hey, it is summer... the neighbor's cows said hi as the Kougaress walked down to the mailbox... they were close to the fence beneath the trees, about twelve feet away... this Big Cat didn't even see them because she was looking down at the wildflowers... it's only when one of them made a movement... yep, a long day getting stuff done!

Buckle down, and buckle up, darling kittens, the world is rocking crazily, chaotically. And remember, this Big Cat loves ya!
~~~~~~

Dante managed to squeeze in a couple of hours’ sleep before the first frantic reports flooded in. There were calls from Deuce and Hoover on his personal phone, and dozens of others on the public “hot line” in the bar. The trouble with being Talbot’s Peak’s unofficial alpha wolf was that people tended to treat him like their personal 911 unit.

He only needed to listen to a handful of calls to get the gist of the peril. Still aching from the wounds he’d sustained in the Philippines, he nevertheless rolled out his motorcycle and roared it down the road toward what sounded like a major disaster.
~~~~~~

Jesse James, U.S. Senator... So, the Kougaress heard this three hour, absolutely amazing show at Revolution Radio ~freedomslips.com~ on Sunday called "Cancel the Cabal", hosted by Stephen Roberts. The guest was Ralph Epperson ~ralph-epperson.com~ who built this ultra fascinating case that Jesse James faked his death, and later became a U.S. Senator under an assumed name. Truly, you just have to hear the show or get the book to appreciate the fine detailed investigation done on this claim. And what a mind-bending, head-spinning story Jesse James' life is... far, far more intriguing than what is generally believed about the outlaw, Jesse James. Several years ago, the Kougaress also read articles about the Confederacy gold Jesse James helped to hide from the Union during the Civil War... well, yep, it's true.

Jesse James Poisoned Lincoln's Assassin
Sunday, June 29, 2014
by Mark Owen
(for henrymakow.com)
Jan 21, 2011
The outlaw Jesse James killed the
actor John Wilkes Booth at the Grand Avenue Hotel in Enid, Oklahoma in
1903 after Booth repeatedly reneged on his oath to never talk about his
secret membership in the Masonic-oriented Knights of the Golden Circle (KGC) and his role in the assassination of Abraham Lincoln.
Source: ~henrymakow.com/john_wilkes_booth_killed_by_je.html~
~~~~~~

Are we really aliens? Was there a race of giants that once inhabited the Americas? A new book, Lost Secrets of the Gods, asks these mind shattering questions. Authors and researchers Paul Von Ward and Micah Hanks joined host Richard Syrett to discuss their essays in this book.

In the first half, Paul Von Ward explained why the use of the word "alien" to separate humans from other intelligent species can no longer be considered accurate. "We are latecomers in this universe and we've had assistance in our development from more advanced beings," he said. Von Ward dispelled creation myths and explained that life exists throughout the universe and arises by evolutionary processes wherever a certain set of conditions exist. Evolution, however, is not an adequate explanation for the modifications that can be seen in human evolutionary history and the rather quick rise of Homo sapien sapiens, he added.

Evidence demonstrates that modern humans have genetic links with an advanced alien species, Von Ward continued. He pointed to the biblical figure Noah, who is described in ancient stories as having blue eyes, curly red hair, and pale skin—traits unlike others in his family tree. Tribal elders believed that advanced beings called Watchers had intervened in the case of Noah and changed the evolutionary track of humans, Von Ward revealed. He also spoke about longevity before and after the flood cataclysm, noting that "some genetic manipulation had to have occurred to cut off our longevity."

In the latter half, Micah Hanks discussed the folklore surrounding giants as well as evidence that may support the existence of larger than normal human beings. He referenced a petroglyph in North Carolina known as Judaculla Rock, named after a giant of Cherokee legend called Tsul 'Kalu. Hanks shared the myth of Tsul 'Kalu and how it ties into the history of purported giants found in the Americas. Anthropologists James Mooney records the tale of a party of slant-eyed giants nearly twice as tall as common men that had come from the West to visit the Cherokee, he reported.

Hanks commented on the contentious debate about the existence of giants, noting that it is not necessarily a conspiracy since some of the best evidence supporting human remains of large stature can actually be found in Smithsonian records. "Back in the 1890s Cyrus Thomas and other members of the Bureau of Ethnology under the Smithsonian were recovering extremely large skeletal remains from Native American burial mounds," he explained. These skeletons were between seven and eight feet long, he added. Hanks suggested that in ancient times there was a greater incidence of these kinds of large people. Get more info on giant skeletons of myth and history at micahhanks.com.
Website(s):

Lost Secrets of the Gods
We've Never Been Alone: A History of Extraterrestrial Intervention
Children of a Living Universe
Magic, Mysticism and the Molecule
The Ghost Rockets
~~~~~~

Strange new humanoid presence in Argentina
A 'floating' figure and some strange lights were observed by at least four witnesses over two nights on the beaches of Necochea in Argentina. — Inexplicata
~~~~~~

MARS: YEAH, AND WHAT'S NEW? ... ANYONE WITH HALF A BRAIN KNOWS THIS ALREADY 'NEWS' ~

Geologist says Curiosity's images show Earth-like soils on Mars
A study based on images and data captured by the NASA rover Curiosity says that Mars had Earth-like soils comparable with soils in Antarctic Dry Valleys and Chile’s Atacama desert. — Phys.Org
~~~~~~

Neuroscience: ‘I built a brain decoder'
Researcher Jack Gallant can read your mind. Or at least, he can figure out what you’re seeing if you’re in his machine watching a movie he’s playing for you. — BBC News
~~~~~~

Crop Circle Baffles Villagers in Southern Russia
The appearance of a mysterious crop circle in a southern Russian village has lead some residents to conclude aliens must have paid them a visit. — The Moscow Times
~~~~~~

Space aliens walk among us? Indeed, claims retired Temple prof
As director of the International Center for Abduction Research, David Jacobs, 71, has made it his life's mission to investigate claims of extraterrestrial abduction. — Philly.com
~~~~~~

How Colors Smell
"Fruity" smells red, and other associations from a new study. — The Atlantic
~~~~~~

Language and an exit from the Matrix
Jon Rappoport | Can we study the history of human language as a smoothly evolving historical process?
~~~~~~

EVERYTHING IS ENERGY 'NEWS' ~

Electric Aliens? Bacteria discovered that exist on pure energy
RT | Microbiologists based in California have discovered bacteria that survive by eating pure electrons rather than food.
~~~~~~