Smoke puffed from his human nostrils... 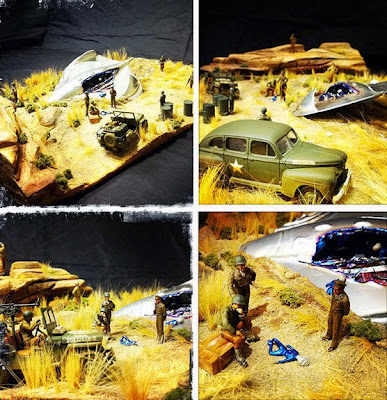 at SHAPESHIFTER SEDUCTIONS ~
Pic from ~coasttocoastam.com~

In commemoration of the Roswell Incident's 67th anniversary I made this scale model of the event as described by alleged witnesses and those involved. True or not, I love this story and wanted to share it with the rest of the believers out there. I took the photos with a retro camera app hoping to capture some 1950's essence.

Late night TGIF mews, Summer-frisky and risky Big Cats... still good weather on the tame prairie... and earlier tonight the almost full moon was a glorious pale yellow-gold hanging low in the southeastern sky... such a beautiful sight... anyhoo, if you want to check out the dynamics of this astrological event, check this site out:

"FULL MOON Super Moon in Capricorn July 12th 2014~
... is here and this one promises to be potent and revelatory. With the Sun in Cancer, the archetype of the Mother, and the Moon in Capricorn, the archetype of the Father, the sacred balance and dynamism of the two becomes illuminated." ~mysticmamma.com/full-moon-super-moon-in-capricorn-july-12th-2014~

Enjoy the super full moon, darling kittens, and keep looking up for those UFOs. And remember, this Big Cat loves ya!
~~~~~~

The Kougar is making progress on her special project and is coming down the home stretch.

No Boy's Allowed
by Serena Shay

Smoke puffed from his human nostrils as Erol watched his fair love and her friend scurry around her abode packing clothes for a trip to Las Vegas of all places.  Why would his Greely choose to go somewhere dubbed “Sin City” when she could be with him?  “Why?”

“Why what, Erol?” She all but huffed at him as she gathered her toiletries.

“Why do you think to go to a place of sin with her?” Erol pointed to the woman currently picking her way through Greely’s overabundance of footwear.

Erol glared at the arrant camel with the smirk on her face.  She and his Fair one had been trying to change what they call “his sexist ways” since the beginning of their time together.
~~~~~~
DELIGHTED ELEPHANTS 'NEWS' ~

WATCH: Delighted Elephants Play Together in the Rain
As light rain falls on Elephant Nature Park in Chiang Mai, Thailand, on July 8, 2014, herds of rescued elephants are in pure bliss - dancing and splashing together around the park. ~accuweather.com~
~~~~~~

Mysterious Earthen Rings Predate Amazon Rainforest
A series of square, straight and ringlike ditches scattered throughout the Bolivian and Brazilian Amazon were there before the rainforest existed, a new study finds. — LiveScience
~~~~~~

Doppelgangers and the Mythology of Spirit Doubles
The mythology of spirit doubles can be traced back thousands of years and was present in many cultures of the past. — Epoch Times
~~~~~~

Secretly Spying on the Moon
The late Ingo Swann was considered to be one of the U.S. Government’s leading Remote-Viewers, and came into contact with a variety of shadowy figures within the realm of government secrecy. — Mysterious Universe
~~~~~~

Hot on the Real Estate Market: Buyers Dying to Live in Haunted Houses
If you think haunted houses are impossible to sell, then you’re in for the fright of your life. — ABC News
~~~~~~