While the Hellephant Rampages... 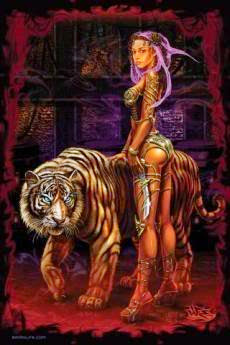 Now that's a pet...
at SHAPESHIFTER SEDUCTIONS ~
Middle of July mews, fascinating and Summer-frolicsome KitKats... definitely unseasonably cool on the tame prairie... nice but strange feeling... so, another busy-trippy day for this Big Cat as she attempts to get done as much as possible... and as usual, wears herself out.

Watch out for the unpredictable, darling kittens. Strange, strange days are ahead. Remember, this Big Cat loves ya!
~~~~~~

On a Mission of Mercy While the Hellephant Rampages
by Savanna Kougar
Mid-July howls and yowls, shapeshifter lovers.

So, while Ewan is heroically trying to save his damsel in distress, and Talbot's Peak is in the path of the mutant mammoth werewolf's mighty trampling feet... what are our other heroes doing?
~~~~~~

About to lift the stein of ale, and enjoy a long draw of the premium brew, Dante paused, then asked, "Gorgio, what can I do for you?"

The goat shapeshifter approached, a nervous smile on his Greek-handsome face. Popular with the lady patrons at the pub, Dante had recently promoted Gorgio to a head server, a raise in pay included, of course.

"Sorry to disturb you, boss. I know you must be busier than–"

"Yeah," Dante interrupted, taking hold of the printed page Gorgio was about to crumple by handling it too much.

"My friends are in danger. Since you don't allow cell phones here..." Gorgio bleated the explanation, even as Dante began reading the intriguing but disturbing news article.
~~~~~~

A series of livestock attacks, occurring during the full moon, has Manilla farmers on edge.
Manila: Bloodsucking creatures are devastating livestock herds in the island of Sibale.

Residents are at a loss over what vicious animal would leave only carcasses of its prey after feasting on them.

An article published recently by the Manila Standard Today said farmers are becoming increasingly fearful of the creature, which strikes when the moon is full, sucks the blood of its prey and tears off the limbs of livestock such as goats.

“It’s a continuing goat massacre happening at the onset of the full moon almost every year since 2012. So far, more than 200 goats had been massacred by this unknown killer,” Sibale Mayor Lemuel Cipriano was quoted as saying by the report.

Locals believe that the culprit was similar to the mythical werewolf, a creature that strikes during the evening and transforms into a four-legged creature. ~gulfnews.com/news/world/philippines/werewolf-wreaks-havoc-on-livestock-in-central-philippine-island-1.1359060~
~~~~~~