Queen of the World... 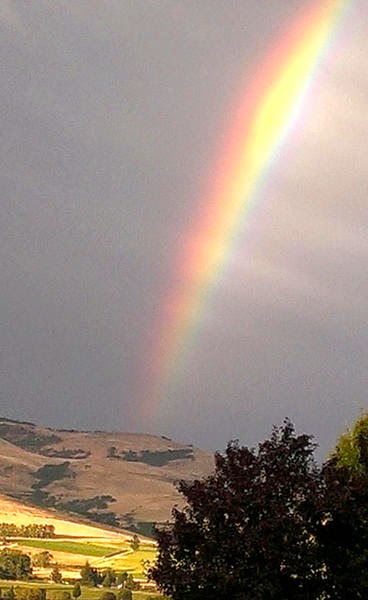 at SHAPESHIFTER SEDUCTIONS ~
From ~coasttocoastam~

In the early evening of July 22, 2014, the Rogue Valley (Ashland, OR.) experienced a summer thunder storm. When I looked to the East from my porch I saw the most amazing rainbow; light on one side, dark on the other, strange streaks throughout, and a particularly bright spot on the yellow spectrum. It also appeared to stop without a full arc. As time passed it began to look like a regular rainbow, but it was certainly out of the ordinary and I half expected to see "The Little People" jump right out of the sky!

Friday night mews, Summer-gorgeous Kittens... and the world turns... despite the mad, mad world... okay that doesn't make sense exactly... except it seems too... oh well... yep, the summery heat is here on the tame prairie... but at least there were some nice strong breezes, and the humidity wasn't as miserable... and the land is beautifully arrayed with wild flowers, hay bales, lush grass, and tall leafy trees.

Look for the safe spots, darling kittens, and hunker bunker down with your loved ones. And remember this Big Cat loves ya!
~~~~~~

Queen of the World, or Not...
Serena Shay

So Erol was none to happy with the picture I used today, but really who could resist the cute little dragon snort above.  My brain is a little singed from all his tantruming.  Who knew dragons could be such drama queens!  hehe

“Really?  Ugh, blaah.  Eeee!” Karma slid from Erol’s lumpy back, choking and spitting before ending up flat on her ass.  “Ow!”  She climbed to her feet, rubbing her sore tush and watched the dragon create an easy slide down his wing for her friend. “You couldn’t have warned me about the bug fest a little sooner?  They’re in my mouth, Gree!  Yuck!”

“Well who knew you’d pull your Titanic impression and go all queen of the world?”

“I was flying, girlfriend, it’s expected.”

Woman Speaks Foreign Language Without Learning It-- as It Was Spoken 150 Years Ago
In the 1970s, famed reincarnation researcher Ian Stevenson encountered a woman who could fluently speak a form of Bengali spoken some 150 years earlier.— Epoch Times
~~~~~~

lnside the mysterious Yamal crater
Scientists are back from a first exploration of the strange crater on the Yamal Peninsula in northern Siberia. Curiouser and curiouser. — EarthSky
~~~~~~

Mystery solved? Annoying hum in Monterey Bay may be toadfish's sex call
The droning hum emanates from the Monterey Bay and has baffled residents all summer long. — Monterey County Herald
~~~~~~

NAH... YOU NEED BOUNCE-ABLE CAR FRAMES THAT REPAIR THEMSELVES 'NEWS' ~

Tomorrow's Fastest Cars Could Be Covered in Morphable Skins
This technology could lead to objects with tune-able surface texture. — Wired
~~~~~~

HEADLINE ~stevequayle.com~ Press Release: University Silences Scientist After Dinosaur Discovery The discovery the scientific community because it indicates that dinosaurs roamed the earth only thousands of years in the past rather than going extinct 60 million years ago.
~~~~~~

The mysterious Cochno Stone to be revealed once more?
~bradshawfoundation.com/news/archaeology.php?id=cochno-stone -
4 days ago ... The 5000 year old Cochno Stone measures 42ft by 26ft and is considered one of the finest examples of cup and ring rock carvings found in the United ... It now appears the Cochno Stone may become visible to the world once ...

HEADLINE ~stevequayle.com~ 5000-year-old Cochno Stone carving may be revealed :It is covered in about 90 carved indentations, or “cups”, and grooved spirals, along with a ringed cross and a pair of four-toed feet.
~~~~~~