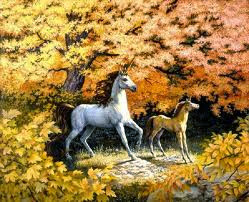 at SHAPESHIFTER SEDUCTIONS ~
Late night mews, Autumn-ecstatic Big Cat Beauties... yes, another glorious Fall day on the tame prairie... the Kougaress can't remember a Fall season with as many overall lovely-weather days... however, there's two more months of Autumn remaining, given this is the 21st and winter begins around December 21st... so, when the Kougaress trekked down to the mailbox around six in the evening, she heard owls hooting... it was like owl in stereo because one was south of this Big Cat and one was north, and they were talking to each other.

And sheer craziness ensues, darling kittens. Keep your wits about you, and prepare like mad. 'Cause this Big Cat loves ya!
~~~~~~

"I'll be wantin' your claws later."
By Savanna Kougar

A bit of authorly news... I've finished the first round of edits for RIDE THE ROAN STUD, written by my alter ego, Stevie Klark, Now, I'm looking forward to the cover art.

Okay, here's the third flash scene in my short series of flashes leading up to the Halloween Blog Hop ~ October 27-31. For the setup, and to read the first one, click on the title Time to unmask my inner cat...
And for the second flash scene ~ Nothing scarier to a man...

"I'll be wantin' your claws later."

"What do you think?" Pasha seductively crooned. "Do you think my wolf-man wants me in chains?"

"Chain...chain...chain..." Sherilyn softly sang the lyrics, trying not to imagine White Fang's lust with Pasha. Dismissing the images, she studied the exact design of the 'barely there' costume.
~~~~~~
ASSIMILATION IS HERE 'NEWS' ~

The Real Cyborgs
Forget wearable tech. The pioneers of our "post-human" future are implanting technology into their bodies and brains. — The Telegraph
~~~~~~

FLIGHT OF THE MYSTERY MAN 'NEWS' ~

Is it a bird, is it a plane? No - it's a mystery man flying past an Airbus full of passengers
The man flew within 100 metres of the plane as it made its descent into Manchester Airport. — Mail Online
~~~~~~

'The Hobbit' turns 10: Find that rewrote human history
The discovery of a tiny species of human 10 years ago has transformed theories of human evolution. — BBC News
~~~~~~

6,000-Year-Old Temple with Possible Sacrificial Altars Discovered
A temple holding humanlike figurines and sacrificed animal remains has been discovered within a prehistoric settlement in Ukraine. — LiveScience
~~~~~~

Facebook demands DEA stop using fake profiles in investigations
RT - Facebook has written a letter to the US Drug Enforcement Administration, demanding it stop operating fake profile pages and cease all agency activities on the social network that involve impersonation of others during ongoing DEA investigations.
~~~~~~

WHO DETERMINES THEY ARE PIRACY SITES??? 'NEWS' ~

INFORMATION IS POWER AGAINST YOU 'NEWS' ~

OS X Yosemite's Spotlight tells Apple EVERYTHING you're searching for
The Register - It's on by default – did you not read the small print?... Apple says it needs to see your queries so it can improve Spotlight's algorithms for suggesting things.
~~~~~~