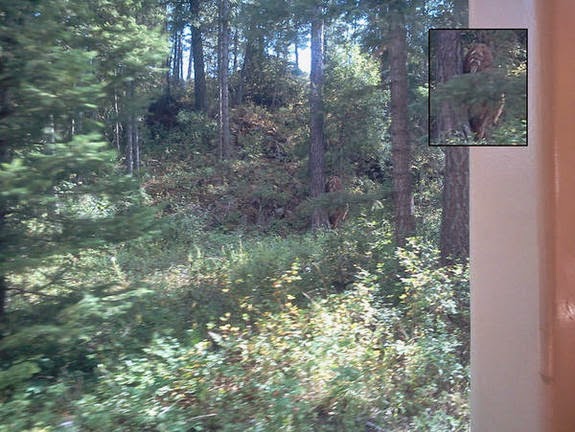 From COAST TO COAST AM ~

Sasquatch Watching a Passing Train
Picture was taken on a cell phone from a moving train near Hayden Lake, Idaho. 8-19-2014. [The creature is enlarged in the square on the right]
--Ricky B.
~coasttocoastam.com/photo/category/most-recent/#69589/Sasquatch-Watching-a-Passing-Train~
~~~~~~

Late night mews, Autumn-rambunctious Felines... the rains came today on the tame prairie... so far, three systems have moved through, the first one pounded for a good while... and certainly the Kougaress counts herself grateful.... 'cause the moisture is certainly needed... looks like there could more rain and/or storms on the way... yeah, another overly long day, but for the moment all is quiet.

Most darling kittens, keep those claws sharpened and ready to strike. Lots coming down at this time. And if you're living in a big city be real careful you don't get caught in a quarantine lockdown situation. It won't be fun. And remember, this Big Cat loves ya!
~~~~~~

So, the Kougar did research for her current WIP, a futuristic cowboy menage. Did you know that the largest protected area of tall grass prairie is The Tallgrass Prairie Preserve near Pawhuska, Oklahoma? It spans 39,000 acres. Yep, this looks like the right location for the heroes' ranch. AND, the Kougar also researched the 1973 Three Musketeers movie, which she absolutely loved! Anyhoo, she needed visuals of the elaborate French costumes at the King's Ball because the costumes are similar for the UnMasked Beast Ball taking place at Dante's Pleasure Club on Halloween Eve. She found one good image, but it didn't show the animal heads the men wore that clearly. Oh well...
~~~

WE now return you to our regularly scheduled blog post. I store my stuff on Google's cloud server and last week, nothing but nothing could convice Google to actually open, so I couldn't post the next chuck of the hippie and unicorn saga. Google Drive is actually working today, so here's your next instalment.

“Gee an’ Bee, shift desk,” Mooney answered unenthusiastically.
“Is this the horribly inappropriately named Guts and Butts Gazette?” a snooty voice said from the other end. Mooney recognized the voice for all that it didn’t belong to any local. It was that nasty little yuppie chick who had been staying at the Wilk place with her yuppie boyfriend.
~~~~~~

FASCINATING... THE PAST REVEALING ITSELF 'NEWS' ~

Mysterious Enormous Underground Labyrinth Of Egypt Holds Secrets Kept From The Outside World :The lost labyrinth, full of hieroglyphs sculpted for eternity in its endless stone walls contains all knowledge of ancient Egypt! http://www.messagetoeagle.com/labyrinthegypt.php
~~~~~~

THE REAL ORIGINS OF NASA 'NEWS' ~

The Occult History of NASA (video)
CONTRIBUTOR: J. Ryan Daniel. Since its inception in 1958 the truth of NASA’s occult origins has been discretely hidden from public awareness; origins linked to perhaps the most “wicked” of all occult practitioners in modern history, Satanist, Aleister Crowley. As well, the highest echelons of NASA’s administration were dominated by secret society initiates including... ~beforeitsnews.com~
~~~~~~