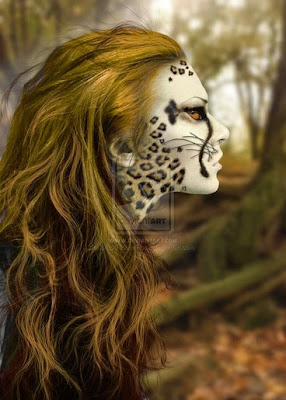 Art from DeviantArt ~
Sign up on the sidebar, if you haven't already.
Late morning mews, Autumn-enchanting KitKats... yesterday was another lovely Fall day on the tame prairie, which this Big Cat really appreciated and enjoyed... so, the Kougaress wore herself out bigtime, and crashed early before doing her nightly bloggie...late afternoon she witnessed the rise of the Full Moon on the eastern horizon... an amazing sight... the moon has never appeared so large or so misty bright... not in this Big Cat's lifetime... later, around midnight when the Kougaress awoke temporarily, she saw the moon high in the night sky... like a celestial spotlight.

Keep preparing for the superstorms of life, darling kittens ... the world is like shifting sands beneath your feet. And remember, this Big Cat loves ya!
~~~~~~

EXTRA! EXTRA! Read All About It...

The Shapeshifter Seductions Newsletter is about to be unleashed. Sign up on the sidebar, if you haven't already.

I must apologize. I had a situation come up today and wasn't able to pen a flash scene. So... here are a couple fantasy images I found... and a loving lion couple.
~~~~~~

Another 1,300-Year-Old Village Discovered in Arizona
The latest basket-maker village dates between 200 A.D. and 700 A.D., based on the types of pottery found, according to Bill Reitze, the park's archaeologist. — ABC News
~~~~~~