Cordelia had honed her vampire’s nose over the centuries... 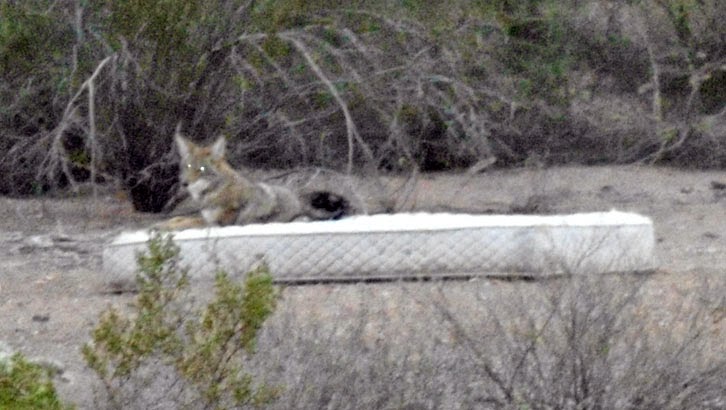 Coyote on Bed
Thomas F. shares this image of a coyote resting on an abandoned mattress in Apache Junction, Arizona. ~coasttocoastam.com/photo/category/nature-environment-earth-changes/#72434/coyote-on-bed~
~~~~~~

Morning mews, Springing pouncing Big Cat Beauties... sunny on the tame prairie right now, but there's been some nice rain the past several days... the yellow butterflies are flitting about, and this Big Cat has seen a couple of bumblebees, and a few other bees... so she's hoping the little critters are holding their own here... anyhoo, the Kougaress is still holding her own during these times... at least, for now.

Springtime happiness to you, most darling kittens, keep preparing for all the superstorms of life. 'Cause this Big Cat loves ya!

Now this was just not right. Cordelia had honed her vampire’s nose over the centuries. She knew living from dead, human from otherwise. Some blood really did taste better than others. And some beings should not be here in her club. Shapeshifters, for instance.

She’d expected the leaders of Talbot’s Peak would want to meet with her. A new player in the game always warrants attention. However, she’d also expected the courtesy of an invitation. A covert infiltration? That was simply rude.
~~~~~~

Spinning disc filmed in the sky over Mexico
Sunday, April 19, 2015
Footage has emerged online of a strange glowing disc-shaped object that appears to spin in the sky. — Unexplained Mysteries
~~~~~~

THE PAST CLOCK REVEALING ITSELF 'NEWS' ~

'Longitude' clock stuns experts by keeping accurate to a second for 100 days - 300 years after it was designed ~dailymail.co.uk/news/article-3045499/Longitude-clock-stuns-experts-keeping-accurate-second-100-days-300-years-designed.html
~~~~~~

WHY IS IT DOWN THERE IN THE FIRST PLACE? 'NEWS' ~

'Eternal' camera can take pictures forever
Sunday, April 19, 2015
A camera powered by the light it uses to take pictures has been invented by American scientists. — BBC News
~~~~~~

THE POWER OF MUSHROOMS AND "A DISEASE CALLED CHILDHOOD"... TWO FAB SUBJECTS 'INFO'

Mushrooms to the Rescue ~coasttocoastam.com/show/2015/04/18~
Date:     Saturday - April 18, 2015
Host:     Lisa Garr
Guests:     Paul Stamets, Marilyn Wedge
Lisa Garr (email) was joined by authority on fungi, Paul Stamets, who talked about his discovery on how to use mushrooms to decompose toxic wastes and pollutants, catch and reduce silt from streambeds and pathogens from agricultural watersheds, as well as control insect populations, and generally enhance the health of our forests, gardens and bodies.
First hour guest, Dr. Marilyn Wedge, family therapist and ADHD expert, discussed how powerful stimulant drugs like Ritalin and Adderall are prescribed to treat childhood hyperactivity but rarely help.
Website(s): fungi.com, marilynwedgephd.com
Book(s):
Mycelium Running
Growing Gourmet and Medicinal Mushrooms
Pills Are Not for Preschoolers
A Disease Called Childhood
~~~~~~