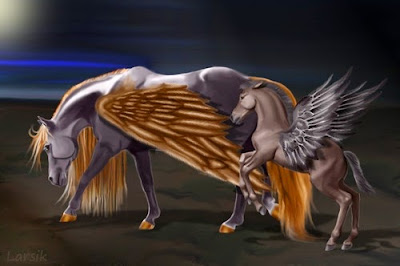 Time to escape into a fantasy story, given how stressful today was...

Late night mews, Springtime *leaping among the flowers* Kittens... some more early morning rain on the tame prairie, but the day cleared for the most part and was pleasantly coolish... so, it's a nutso world alright, with everything that's happening these days... then, this Big Cat dealt with several majorly stressful and crazy situations today that made her feel like she was in a worldwide insane asylum, like the movie, ONE FLEW OVER THE CUCKOO'S NEST  -- one of them being forgetting to pay the water bill until it was too late to call, and the due date is today... and then the online account thingie refused to recognize the information, which happened long ago, and why the Kougaress never set up an account because the stupid system wouldn't let her... but she tried with all due diligence today, but the system simply wouldn't cooperate, a problem this Big Cat hasn't had with other online systems... be that as it may, now there'll be a late fee... but that was just the tip of the iceberg, as far as how the day went for awhile... fortunately, it's calmed down now... but, wow, a wonderful crop of dandelions has appeared along the drive down to the mailbox... speaking of, on her way down to said mailbox, the Kougaress heard this slowly moving vehicle, and stopped to watch, just in case, since she's by herself with no immediate help around... from a distance this Big Cat watched a rather large and odd white van roll by, as if whoever was looking for an address, or as if those inside recorded the layout, and everyone's property... the van didn't look like a typical family van or minivan, that's for sure... and there were no markings the Kougaress could see, as in some type of utility, county, or business vehicle... definitely odd.

Take care, and share the magnificence you are, darling kittens. And remember, this Big Cat loves ya!
~~~~~~

So, the Kougar got some work done on her SHAPESHIFTER SEDUCTIONS WIP, starring Keina and Drev... looks like she'll be including an action-fight scene she hadn't planned on because of the direction the story took... the heroine, Keina, and Symone, a secondary woman character, will team up to protect Talbot's Peak territory.... looks like there's a bad-news drone about to invade the airspace over the Peak... or something along those lines... 'course, there could be a rogue big-bad dragon attack???

Jurassic Park in real life: The race to modify the DNA of endangered animals and resurrect extinct ones ~independent.co.uk/news/science/jurassic-park-in-real-life-the-race-to-modify-the-dna-of-endangered-animals-and-resurrect-extinct-ones-10176678.html
~~~~~~

YEAH, SO TOO BAD WE DON'T HAVE THOSE FLYING CARS WE WERE PROMISED... DRONES WOULDN'T BE A PROBLEM 'NEWS' ~

GOTTA HAVE THOSE KILLER ROBOTS... THE SELF-DESTRUCTIVE IDIOCY, DOES IT EVER END? 'NEWS' ~