In spring, a young man's fancy... and the woman coyote beauty... 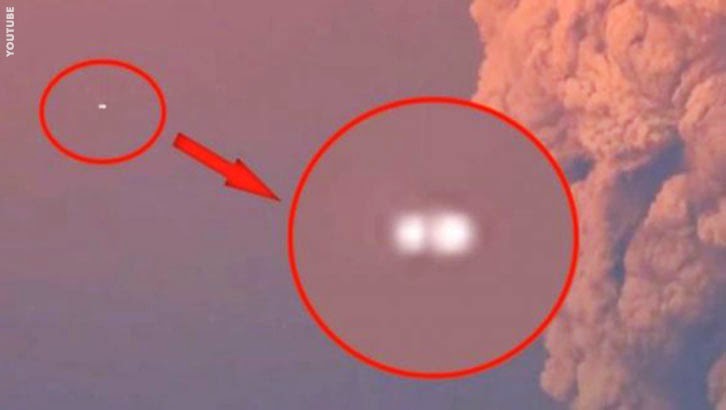 Youtube user Ana Luisa Cid has posted video of a mysterious object in the sky near the erupting Calbuco volcano in Chile. According to her description, the luminous UFO appeared near the plume, remained static, and then vanished. Some have speculated the object may be a drone or a helicopter attempting to record the eruption. More at Unexplained Mysteries. ~coasttocoastam.com/pages/ufo-spotted-near-chilean-volcano~
~~~~~~

After midnight mews, Spring-pouncing Big Cat Beauties... the Kougaress can't believe how fast the green is greening and growing thickly... it's purely amazing... and yesterday, this Big Cat saw several cute butterflies on her quick trek down to the mailbox to retrieve her highspeed modem... oh gosh, it's a long tiring story of the trials that entailed... however, everything worked out fine... and everything is working computer-wise, except for the windows media player... and the Kougaress has no clue how to fix that problem... she tried looking it up per internet... but, there were no good solutions offered to people who had asked that very question... although, now she can use other players, so at least, those important bases are covered.

Keep the love alive, most darling kittens. For, the times are troubling and we need each other. And remember this Big Cat loves ya!
~~~~~~

Break Day
by Pat Cunningham
I was wrestling with this week's blog when I decided, heck with it, let's see what I can find on Google Images. So you're getting a picspam today.

In spring, a young man's fancy turns to thoughts of love. In Talbot's Peak, that can go in all sorts of directions ...

I've been busier than a fox in an unguarded henhouse... including being forced to upgrade to highspeed internet – which I didn't know was now available in my tame-prairie area –  because my dialup number will no longer be available – so that's been somewhat of an adventure, and I lost sleep putting it all together last night. But so far, so good... and a huge improvement over my primitive computer system...

Thus and so, here's a continuation of my flash scene from last week, titled: Coyote Shapeshifter Lost On Earth

No yip-yip doubt he was beguiled...

Her tantalizing odor tickled his nostrils, an unceasing wonderful torment that drew Drukr closer...and ever closer. No yip-yip doubt he was beguiled by the woman coyote beauty who'd been chasing his furry and his bare-butt tail. For good reason.

Yet he couldn't return to Ship. He'd been laser tagged by an alien spec-ops team, who were serious as a sucking blackhole about capturing him. And, not just bagging him for interrogation and gruesome experiments, but for Borg-ing the silicon-control structure of his commerce spaceship.
~~~

Black Boxes: Vanishing Point of Freedom
David Knight | Why hot rods are a symbol of liberty.
~~~~~~

'Bizarre' Jurassic dinosaur discovered in remarkable new find
Fossil hunters in Chile have unearthed the remains of a bizarre Jurassic dinosaur that combined a curious mixture of features from different prehistoric animals.
The evolutionary muddle of a beast grew to the size of a small horse and was the most abundant animal to be found 145 million years ago, in what is now the Aysén region of Patagonia.
The discovery ranks as one of the most remarkable dinosaur finds of the past 20 years, and promises to cause plenty of headaches for paleontologists hoping to place the animal in the dinosaur family tree.
“I don’t know how the evolution of dinosaurs produced this kind of animal, what kind of ecological pressures must have been at work,” said Fernando Novas at the Bernardino Rivadavia Natural Sciences Museum in Buenos Aires.
http://www.theguardian.com/science/2015/apr/27/bizarre-jurassic-dinosaur-chilesaurus-diegosuarezi-discovered-in-remarkable-new-find
~~~~~~

Lake Michigan is So Clear Right Now its Shipwrecks Are Visible From the Air
Tuesday, April 28, 2015
A Coast Guard patrol spotted the wreaks in shallow waters that are only clear after the lake's ice melts and before summer sediment swirls and algae blooms. — Smithsonian.com
~~~~~~

YEAH, WHAT HAPPENED TO COMMERCIALIZATION AS IN YOU GET BUY THESE TINY ROBOTS? 'NEWS' ~

THESE WON'T BE GOOD *PROTECT AND SERVE* ROBO-COPS 'NEWS' ~

Smart policing to come Dubai with robo-cops
Khaleej Times | In the next two years robots will be used to bolster police forces patrolling malls and other public areas.
~~~~~~

Navy researchers make bulletproof glass out of clay
Sunday, April 26, 2015
The US Naval Research Laboratory has created a transparent, bulletproof material that can be molded into virtually any shape. — Engadget
~~~~~~

YOU PAY FOR IT, BUT DON'T GET KNOW ANYTHING ABOUT IT 'NEWS' ~

IF SO, SOMEONE NEEDS TO ALTER THE PROGRAMMING 'NEWS' ~

Are We Living in a 2D Hologram?
Sputnik | New research suggests that our universe may behave according to the holographic principle of theoretical physics.
~~~~~~