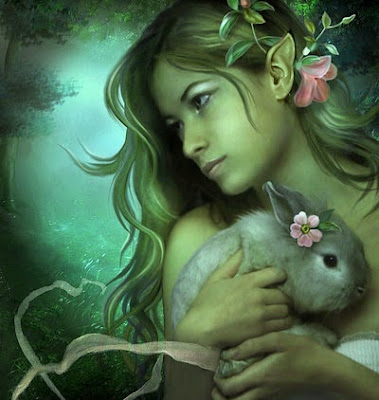 Late afternoon mews, Good Friday Fantastical Felines... cool winds whip over the tame prairie today, and the temps have dropped to chilly... last night, the Kougaress had to shut the computer down early, given the lightning storm... which was fairly tame, but bad enough to be dangerous... and, no fun, the ticks are already out and about and leaping on this Big Cat... however, on the good Spring side, a couple of days ago, the Kougaress saw a Blue Jay... she hasn't seen one for a long while... and, the squirrels are tromping all over the roof in their springtime exuberance.

Happy Rabbit and Egg Time, most darling kittens. Give those you love a good snuggle and huggle. And remember, this Big Cat loves ya!
~~~~~~

See a Blood Moon in Shortest Eclipse of the Century
Friday, April 3, 2015
A total lunar eclipse will dazzle sky-watchers in the western half of North America. — National Geographic News
~~~~~~

So, the Kougar got a bit more done on Kiena and Drev's love story... here's a possible tagline:

Ex super-soldier boy meets winged filly girl. Will they live happily ever after? In Talbot's Peak territory anything is possible.

Okay, the Kougar managed to sign up for the HOT FOR FRIDAY link-blog at the Book Boyfriends Cafe ~bookboyfriendscafe.com~ and will be putting a 'line' on the TITLE MAGIC blog  ~titlemagic.blogspot.com ~ [never mind blogger didn't bother publishing at the time indicated ~sighs~]

AND, both this Big Cat and Pat Cunningham posted at SHAPESHIFTER SEDUCTIONS, given Serena couldn't manage it, given her school work.
~~~~~~

What Your Dog Craves Most from You
Dr. Becker - This study may come as a surprise, even if you believe you're doing everything "right." Without exception, when given a choice between their owner and a complete stranger, the person who did this always won the dog's heart and attention. Is your pup getting enough?
For all you dog lovers out there, this news will come as absolutely no surprise: your canine companion loves to be petted! He even loves it more than praise.
This reality of every dog guardian's life is now backed up by a study published recently in the journal Behavioural Processes.1 Two researchers from the University of Florida decided to investigate whether dogs favor petting over verbal praise. They also wanted to know if it mattered to the dogs who did the petting or offered praise – their owner or a person unfamiliar to them. http://healthypets.mercola.com/sites/healthypets/archive/2015/04/01/dogs-favor-petting-over-praise.aspx
~~~~~~

Strange 'Hollows' on Mercury Revealed by NASA Probe as Mission End Nears
Friday, April 3, 2015
The finding suggests that Mercury may have lost some of its lighter elements, such as sodium and potassium —a phenomenon that may still be happening today. — Space.com
~~~~~~

The Man Whose Brain Borrowed Nearby Identities
Friday, April 3, 2015
After a brutal car crash, a 43-year-old Polish man seemed to "lack a personal sense of identity" and would borrow the identity of whoever happened to be nearby. — New York Magazine
~~~~~~

THIS IS KINDA COOL CAMEL 'NEWS' ~