Flashback ~ Running of the Buck Rabbits 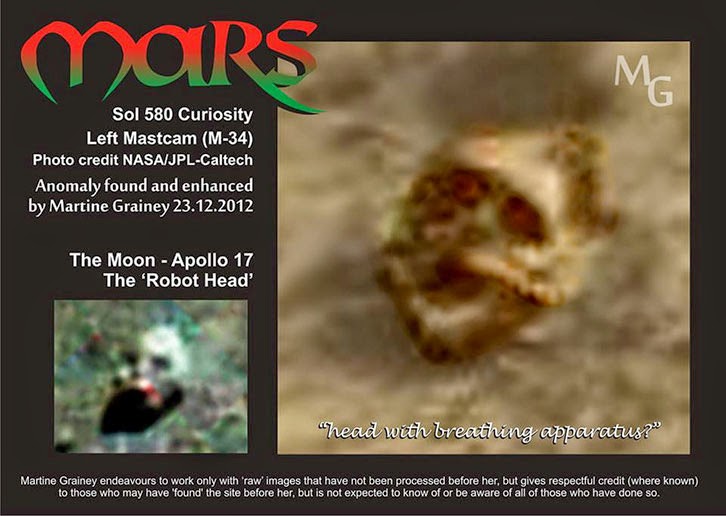 Apparent skull and helmet on Mars, captured by Curiosity on Sol 580, compared to "Data's Head," found on NASA Apollo 17 lunar images from Shorty Crater by the Enterprise Mission, 2006. The Martian comparison was found, processed and posted December 23, 2012, by Martine Grainey.
~coasttocoastam.com/pages/hoagland-images-3-27-15~
~~~~~~

Morning mews, Exceptional and Spring-energized Felines... sunny-warm on the tame prairie yesterday... rainstorms look to be moving in this evening... the beautiful greening continues and feels like its own special miracle... but wow, this Big Cat remains on constant overwhelm, given everything that has to get done... the neighbor kindly put some T fence posts alongside her mailbox to keep it from being the victim of random hit and runs... she found out his mailbox, which is protected-encased by steel pipes... well, teenage boys tried to run it over with a pickup a couple of years ago... he caught them because the truck was hung up, and they couldn't go anywhere... that would have been a funny, poetic-justice scene... this Big Cat is sorry she missed it.

Happy Easter Week, most darling kittens. Romp in the sunshine, and love each other. And remember, this Big Cat loves ya!
~~~~~~

So, the Kougar is writing Chapter Twenty-two of her SHAPESHIFTER SEDUCTIONS WIP... the villain is having his say.
~~~

Flashback ~ Running of the Buck Rabbits

This was a flash written during the 2012 Spring Equinox about Sadie, a rabbit shifter on a mission of sweet revenge.

Given my time restraints, I figured a flashback would be the best idea. I need to keep writing on my latest SHAPESHIFTER SEDUCTIONS WIP, which has had several tentative titles, the newest being Soar Into His Heart.

HAPPY EASTER, Everyone. And as I said on March 20, 2012... May Springtime bring you joy and a beautiful connection with our Mother Earth.
~~~

Running of the Buck Rabbits

Competing with the raw green smells of Springtime, the fast heated blood of rabbit shapeshifters tantalized Dante's nostrils as they morphed to human form. Their rapid heartbeats called to his wild wolfen nature, and he mentally licked his chops.

Instead of giving chase, Dante merely shook his head as he observed the gathering of the two rabbit clans from atop an outdoor stand, disguised to look like it belonged to human hunters. Yip-yip awoooo, the first day of Spring, what else did he expect? When the bunny bucks turned March-mad with the need to hump and mate.
~~~~~~

Hummingbird Migration Map
Hummingbirds.net - This website is a place to learn about attracting, watching, feeding, and studying the hummingbirds that breed in North America. Included is a map where you can track and report your sightings. This map is very helpful to know when to put your feeders out.
~~~~~~

Facebook accused of tracking all users even if they delete accounts, ask never to be followed
London Independent | Academic researchers said that the report showed that the company was breaking European law with its tracking policies.
~~~~~~