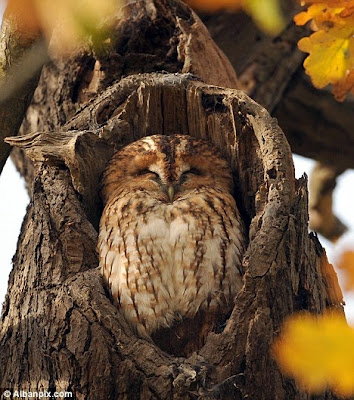 Such an owl cutie...

Late night mews, stargazing Big Cat Beauties... somewhat warmer today... at least, it was above freezing... another hectic-busy day, and this Big Cat is ready to crash!

So, darling kittens, keep the claws at the ready, but get enough rest for the times ahead. And remember, this Big Cat loves ya!
~~~~~~

Some progress on the Kougar's short story... but it's been slow going. Oh, and Siren Publishing wants a bio, and a question interview for this Big Cat's alter ego, Stevie Klark... right now, the interview thing seems daunting. ~sighs~

Crime-Fighting Robots Go On Patrol In Silicon Valley
November 18, 2014 11:43 PM
MOUNTAIN VIEW (KPIX 5) – A new kind of security guard is on patrol in Silicon Valley: crime-fighting robots that look like they’re straight out of a sci-fi movie.
At first glance, the K5 security robot looks like a cartoonish Star Wars character.
“The vast majority of people see it and go, ‘Oh my God, that’s so cute.’ We’ve had people go up and hug it, and embrace it for whatever reason,” said Stacy Stephens, co-founder of Knightscope, headquartered in Mountain View. ~sanfrancisco.cbslocal.com/2014/11/18/crime-fighting-robots-go-on-patrol-in-silicon-valley-k5-knightscope-mountain-view-stacy-stephens-autonomous-security-guard
~~~~~~

Shape-shifting home transforms throughout the year in response to changing temperatures
A pair of London architects has designed an incredible 'folding' house that shapeshifts into eight different configurations and automatically adapts to the changing seasons. — Mail Online
~~~~~~

Geckos inspire scientists in US military-developed Spider-Man suit project
US military scientists have developed a material which enables a human to ascend a vertical glass wall. — The Guardian
~~~~~~

Webcam hackers could be watching you, watchdog warns
Press Association | UK to take action to close down Russian website streaming images from British webcams including baby monitors and those in gyms and bedrooms.
~~~~~~