Too cold for thought... 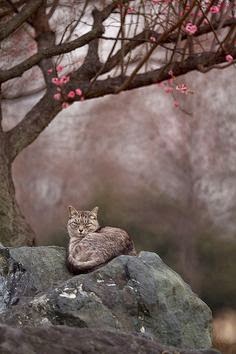 Late night mews, fireplace-lounging Felines...way too fricking, fracking cold on the tame prairie... yep, the Kougaress bundled up bigtime to trek down to the mailbox, which she would have ignored for once, except a package arrived... fortunately, only her hands got too cold because the gloves were too thin... and its not warming up for the next couple of days, either... ~boo-hoo mew~

So, darling kittens, lots of not-good stuff is about to smash against the turbine fans... beware, take care, and prepare. 'Cause this Big Cat loves ya!
~~~~~~

So, the Kougar received her final edit for RIDE THE ROAN STUD, written by her alter ego, Stevie Klark. Everything looked darn good except for a misunderstanding about an overheard phone conversation, and how it should be formatted.

Also, the Kougar is thinking of penning a holiday short story, about 10,000 words or so, which is set in the Talbot's Peak area, our fictional shapeshifter/supernatural town at SHAPESHIFTER SEDUCTIONS. She's also on working on WILD CARD WOMAN, her futuristic paranormal cowboy menage.
~~~

Too cold for thought
by Rebecca Gillan

I love Colorado. I was born here, grew up here and in Wyoming, lived in a few other places like Alabama and Hawaii, but ended back in Colorado. Here, I’ve stayed. Why? Because it’s like a box of chocolates. You never know what you’re going to get. Take this week for instance. On Monday in Denver, we hit our high of 53 degrees at 10am. By 10:30, the temperature had dropped 20 degrees, ushered in on a typhoon of whirling crap with 30 mile-an-hour winds.
~~~~~~

15 Doomsday Fiction Books That May Soon Become Reality
The Daily Sheeple - Sometimes, fiction can inspire us in a way that a dry, how-to or non-fiction book cannot. Many preppers remember the book that woke them up and made them say, “Wow – that could really happen. I need to change the way I’m doing things and get prepared.” Reading post-apocalyptic fiction can help us to “war game” and figure out “what would I do if….”
~~~~~~

1,000-Year-Old Tomb Reveals Murals, Stars & Poetry
Found not far from a modern day railway station in China, the circular tomb has no human remains but instead has murals which show vivid scenes of life. — LiveScience
~~~~~~

CYBORG MEDICINE... NO THANKS 'NEWS' ~

The Cyborg Medicine of Tomorrow Is Inside the Veteran of Today
More and more, American veterans are arriving at that future before the rest of us. — Defense One
~~~~~~

Multiverse Collisions May Dot the Sky
Early in cosmic history, our universe may have bumped into another — a primordial clash that could have left traces in the Big Bang’s afterglow. — Quanta Magazine
~~~~~~

Event: Feed the Homeless - Ft. Lauderdale, FL Dec 17th
Daily Paul - So the Libertarian party of Florida is organizing a 'feed the homeless' day in light of the recent arrests for the "crime" of charity. If you're in or near Ft. Lauderdale come join us. If you're not, share this far and wide!
~~~~~~