The Man With the Camera 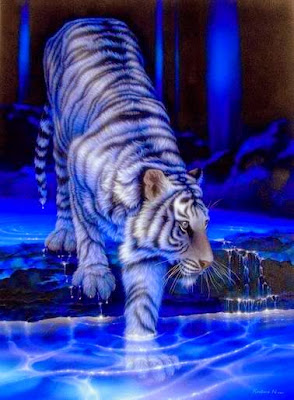 at SHAPESHIFTER SEDUCTIONS ~
Morning mews, Autumn-enjoying Big Cat Beauties... so, the Kougaress crashed before posting last night... she was falling asleep at the computer... dreary and overcast yesterday with some good rain the night before last on the tame prairie... anyhoo, the world keeps turning and this Big Cat is along for the mad-busy ride.

So, yeah, listening to Howard Bloom on Coast to Coast am, the replay... he's brilliant in so many ways... but unfortunately, he doesn't own a clue about what is really going on underneath it all... and this Big Cat just realized at a deeper level, dreams are worth crap if they aren't based on the TRUTH.... thus, given everything you know is lies and based on lies... like the TRUMAN SHOW... well, the conclusion is obvious... unless, you are coming from the 'truth of things' our best and highest dreams can't be achieved. And so it goes, or does not.

All good to you, darling kittens. Keep exercising those claws and fangs. And remember this Big Cat loves ya!
~~~~~~

The Man With the Camera
by Savanna Kougar

Yep, a shout out to all those Turkey shapeshifters. Watch out!

Okay then, this flash scene is a spinoff from Pat's flash from yesterday. However, it all began with a previous flash scene I wrote, titled:

The Wide Open Invitation of the Montana Sky... And the Resurrected Mammoth...

From high on a mountain perch, the man filmed the flying horse as she cavorted in the skies. He'd been tracking her for the last year, in human form and horse form. Now finally, as her coat blazed a beautiful shade of red beneath the bright sun, he'd been able to capture the not-myth filly in flight.

No one would believe him, of course. Despite his evidence. Photoshop and the tech-wonders of the movie industry had seen to that.

He'd already made his peace with that reality. However, he had other plans. A daring one at that.
~~~~~~

VIDEO: Emerald Fireball Leaps Across Sky From Midwest to Southeast
Skies across Chicago and as far south as Georgia were aglow Monday night as an emerald-tinted fireball was spotted shortly after 6:20 p.m. EST. ~accuweather.com~
~~~~~~

OH. MY. GAWD!!! EVERYONE SHOULD BOYCOTT THIS CRAP 'NEWS' ~

Largest School Lunch Boycott Starts Today in Connecticut
Farmington High School of Farmington, Connecticut organized the Facebook event to boycott the school lunches for November 3-7th. The peaceful consumer demonstration protests not only the incredibly dismal quality of the food, but also the harsh credit system that denies lunches when accounts are slightly overdrawn…. Students have found mold, uncooked chicken, expired food, unidentifiable blobs, dead bugs and human hairs. They have described portion sizes for $3.50 lunches that amount to a couple of gulps.
~~~~~~

YA JUST GOTTA SHAKE YOUR HEAD IN DISBELIEF 'NEWS' ~

US TV host refuses to accept Ireland uses the euro
London Independent | A US TV presenter just took the confusion to a new level.
~~~~~~

HEADLINE ~stevequayle.com~ In violent Venezuela, bulletproof everything-: Venezuela is known for its obsession with beauty contests and plastic surgery. Now, the latest fashion rage is bulletproof clothes and cars to protect against rampant violent crime.
~~~~~~