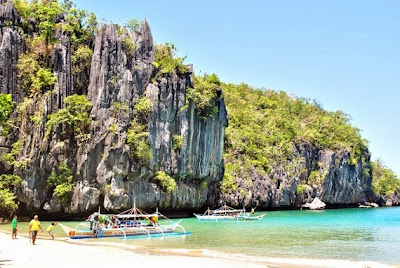 The Lost Underground River World in Paradise
Palawan Island in the Philippines harbors one of the longest and most mysterious underground river systems in the world. ~mysteriousuniverse.org/2015/01/the-lost-underground-river-world-in-paradise~
~~~~~~

Closing in on midnight mews, marvelous and mighty Felines... a rainy day on the tame prairie, which is a good thing because the land definitely needs the rain... however, the gray cloudiness just gets to this Big Cat nowadays, drains her of energy... so, once she got everything necessary done, the Kougaress crashed and slept for a bit.

Stay cozy and cuddled, most darling kittens, and keep a wary eye out. Lots going on and coming down the proverbial pike now. But remember, this Big Cat loves ya!
~~~~~~

The Kougar got a bit done on her ShapeShifter Seductions WIP... sadly, she was just too worn out today.
~~~

Gill looked out the sliding patio doors leading off the sun porch out on to the patio.  The fire pit glowed as the last of the coals from the night’s fire cooled.  More snow and window whistled down and off the roof swirling snow dust storms in between the few pieces of patio furniture remaining outside.

UFOs Over London: Latest Reports
London’s skies have been flapping like crazy in the days around Christmas and New Year. — Londonist
~~~~~~

A Wormhole Close to Home and 2 Other Astonishing Space Holes
It’s possible a wormhole exists in the middle of the Milky Way that could be large and stable enough for a spaceship to enter. — Epoch Times
~~~~~~

Weekender: A Skeptic’s Close Encounter on His Wedding Day
Friday, January 30, 2015
What happens when hardcore skeptics have an inexplicable encounter with the paranormal? Their eyes may open, their heart may soften, and their conviction in the rectitude of their own opinions may be forever shaken – providing they’re intellectually honest. The founder of Skeptic magazine clearly is an honest man; for when Michael Shermer had a close encounter of another kind on his wedding day last year, he let the whole world know about it in his monthly column in Scientific American. ~unknowncountry.com~
~~~~~~

Earthfiles investigative reporter Linda Moulton Howe ~earthfiles.com~ discussed the strange phenomenon of unexplained booms as well as quakes, a former Navy pilot's observations of UFOs in and around the South Pole, a secret 1954 training manual about ET technology, and ufologist Stanton Friedman's views. In the first 12 days of January 2015 in 12 different states, very loud, explosive, house-shaking booms were reported to police, fire, emergency management agencies, TV stations and social media by hundreds of people. She spoke with Todd Seelye of Cedar Falls, Iowa who experienced an "enormous deep boom" that came out of nowhere, and shook his entire house. In addition to the booms, between January 8-15, a dozen low magnitude quakes vibrated people living near Plainfield, Connecticut. Geophysicist Alan Kafka told Linda that the swarm is "enigmatic and unprecedented" and baffles seismologists. No quake activity has ever been noted in the area since record keeping began in 1638. More ~earthfiles.com/news.php?ID=2274&category=Environment~.

Brian, a retired U. S. Navy Petty Officer First Class Flight Engineer went on the record with Linda and revealed UFO and high strangeness episodes he had while on duty in Antarctica particularly during the 1995-6 period. These included seeing silvery objects darting around the mountain tops, a huge hole in ice near the South Pole that was akin to a cave entrance, and a group of scientists who disappeared for two weeks. The scientists were reportedly interacting with extraterrestrial biological entities down inside the hole, he said. Further details ~earthfiles.com/news.php?ID=2275&category=Environment~.

In her third segment, Linda spoke with retired aerospace engineer Bob Wood, Ph.D., and his son Ryan Wood, high tech and aerospace businessman, about what they've called "the most important and authentic government UFO and ET-related document we've investigated since the 1990s." Entitled "Extraterrestrial Entities and Technology, Recovery and Disposal" (SOM1-01) and stamped with the US War Office logo by Majestic-12 Group in April 1954, the 30-page training manual leaked from a Wisconsin source details how to recover downed extraterrestrial craft; how to retrieve extraterrestrial biological entity bodies, both dead and alive; shipping guidelines; Top Secret locations for various shipping contents; and strict guidelines about how to keep all of it hidden from the public and media. The Woods have created a special website ~specialoperationsmanual.com~ examining the manual.

Nuclear physicist, UFO investigator and author Stanton Friedman agreed with Bob and Ryan Wood about the authenticity of the remarkable SOM1-01 training manual. In addition to the manual, he finds validity in the Truman/Forrestal memo of 1947 about Majestic Twelve (MJ-12). The MJ-12 committee was the code name for a group of scientists, and military and government officials who reportedly dealt with the recovery and investigation of alien craft. Friedman also spoke about Harvard astronomer Donald Menzel who was listed as one of the MJ-12 members, even though he had published several anti-UFO books. More ~earthfiles.com/news.php?ID=2277&category=Environment~.
~~~~~~