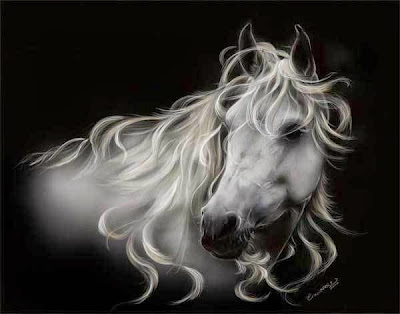 Say goodbye to the Year of the Horse...
at SHAPESHIFTER SEDUCTIONS ~
Very early mews, fantabulous and fun Felines... finally, a blanket of snow on the tame prairie... about three inches worth, and it's lovely... but the cold temps! ... ~huge sighs~ this Big Cat so dislikes all these frigid temps... anyway, 'cause she could get online now, and with all the problems recently with getting online, she's up instead of sleeping.

Take care, most darling kittens, and here comes the Chinese Year of the Sheep. Time to ram-charge toward your goals. Just remember, this Big Cat loves ya!
~~~~~~

It had to happen eventually, Gil thought. When you’re in politics, scat like this hit the fan as a matter of course. That didn’t stop him from seething.

He knew he could strike Louie and the gang at Rattigan’s off the suspect list. Maybe last year one of them might have done it as a joke, but not now. He had a wife and children now. Louie had backed off from the practical jokes the second Chloe announced her pregnancy, and saw to it everyone else did too. Louie had a cleaver. No, it hadn’t been anyone at Rattigan’s.
~~~~~~

Big Brother Knows What You’ve Been Reading
New American | Every book you read on your Kindle (or Kindle app) and every word you highlight in those ebooks is recorded by Amazon.
~~~~~~

MAMMALS AND DINOSAURS LIVING TOGETHER 'NEWS' ~

ON THE MAGICAL SIDE 'NEWS' ~

Go to Prison for File Sharing? That's What Hollywood Wants in the Secret TPP Deal
Activist Post - The Trans-Pacific Partnership agreement (TPP) poses massive threats to users in a dizzying number of ways. It will force other TPP signatories to accept the United States' excessive copyright terms of a minimum of life of the author plus 70 years, while locking the US to the same lengths so it will be harder to shorten them in the future. It contains DRM anti-circumvention provisions that will make it a crime to tinker with, hack, re-sell, preserve, and otherwise control any number of digital files and devices that you own.
~~~~~~