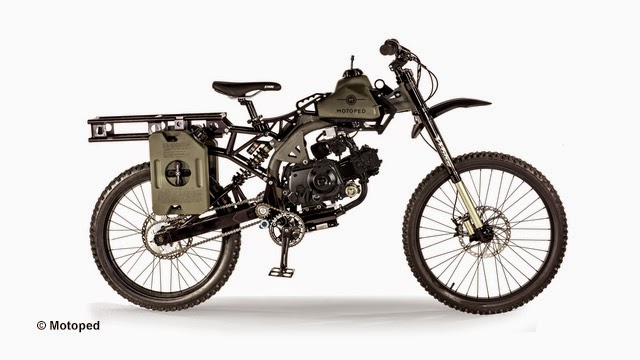 The Kougaress wants one of these cool mopeds...
at SHAPESHIFTER SEDUCTIONS ~
Missouri company invents amazing survival moped that could help you bug out on a gallon of gas
(NaturalNews) The Survival Bike is actually a moped designed to be, as the MOTOPED website puts it, "a utilitarian, military-inspired super-hauler," ideal for bugging out in style on two wheels. It has a primary fuel tank and two auxiliary tanks which allow up to 500 miles of travel without a fill-up.
Like all true mopeds, it can be pedal-driven as well as engine-powered, which could make it very useful in a number of situations -- for instance, if stealth is required, pedaling the Survival Bike would not attract attention due to engine noise. ~naturalnews.com/048496_survival_moped_prepping_fuel_efficiency.html~
~~~~~~

Late night mews, *in the afterglow of the full moon* Big Cat Beauties... so, the bitter cold swept onto the tame prairie, and it's going to be effing frigid later tonight... the good news is, it's supposed to warm up in a couple of days... for the last decade, at least, the weather has been a roller coaster of cold, then warm during the winter months... however, so far, this winter, the roller coaster is faster and the temps even more extreme as far as bitter cold, then a 70 degree day... anyhoo, what another weird day, not to mention this Big Cat had one helluva time getting onto the internet AGAIN... she tried both Firefox and IE, and they couldn't connect to the servers for over an hour... so, sheesh!

Cuddling and snuggling, darling kittens, a good thing especially in these trying times. And remember, this Big Cat loves ya!
~~~~~~

The Kougar got some good writing done on her SHAPESHIFTER SEDUCTIONS WIP.
~~~

So I was going to write a blog post about the this Groundhog Day picture, but I got distracted. I'll just post the pic and then a snippet from 'Witch's Moon instead. Have a great week!

My first stop after making sure the girls had everything under control was the Bighorn Diner. It really was only dawn, after all, which meant breakfast time and I had been wanting to try Miss Ellie’s famous strawberry triple stack flapjacks. It wasn’t like I ever had the time during the day to go out for breakfast and I was totally taking advantage of this one.
~~~~~~

Newfound 'Gospel of the Lots of Mary' Discovered in Ancient Text
A 1,500-year-old book that contains a previously unknown gospel has been deciphered. — LiveScience
~~~~~~

The 'Vanishing Triangle' Remains One of Ireland’s Most Eerie Mysteries
There were six women officially–nine by some counts–who went missing beginning in 1993. Rewards were offered for any substantial information about the disappearances, but none bore any fruit. — Mysterious Universe
~~~~~~

Biggest rodent 'fought with teeth' like tusks
The bull-sized cousin to the guinea pig died out around two million years ago. — BBC News
~~~~~~

The sensor that can give you a SIXTH SENSE: Film can give hands the ability to 'feel' magnetic fields
~dailymail.co.uk/sciencetech/article-2938706/The-sensor-SIXTH-SENSE-Film-hands-ability-sense-magnetic-fields.html
~~~~~~

SHOOT, THEN WHY BOTHER DOWNLOADING ADBLOCK PLUS? 'NEWS' ~

Google is paying AdBlock to unblock their ads
Phandroid - If you’re a savvy internet user you’re probably using some sort of ad blocker (though hopefully not on your favorite sites). The most popular ad blocker is called AdBlock Plus, which boasts over 300 million downloads worldwide. That’s a lot of advertising dollars that are going unseen by internet users. Google, along with Amazon, Microsoft and Taboola, have decided to do something about it. The Financial Times is reporting that these companies have paid AdBlock Plus to allow their ads to pass through the blocking software.
~~~~~~

THE KOUGARESS LOVES SPORTS, BUT NOT THE SUPER BOWL CRAP GAME... THE HYPE IS ATROCIOUS, AND THE GAME HAS MOST LIKELY BEEN FIXED... SO, IT'S NOT EVEN WHO IS THE BEST TEAM 'NEWS' ~

Why I Skipped Super Bowl Sunday This Year — It’s Just a Football Game, People!
The PPJ Gazette by Gary G. Kohls, MD - A surprising 50% of the US population didn’t watch the 9 hours of TV coverage of Super Bowl Sunday this year. I confess that I was one of them. And it wasn’t the first time that I have intentionally skipped the over-hyped, often tiresome Super Bowl extravaganza, reportedly the day when there is more domestic abuse than any other day of the year. I suppose such an act will be counted as heresy among some of my friend, but so be it.
~~~~~~