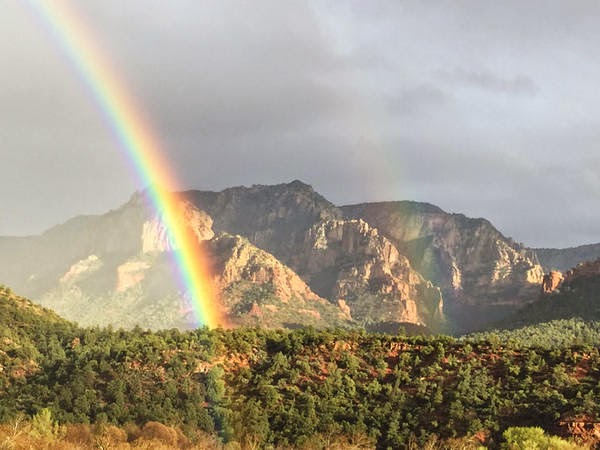 Sedona Double Rainbow
2/23/15-- Double rainbow outside of our hotel in Sedona. The end of the rainbow was just outside of our balcony. Could not see any gold but the view of the mountains is priceless.
--Angela Foster
rxtekcpht@ yahoo.com
~~~~~~

After midnight mews, gorgeous and kitten-glamorous Felines... yep, the Kougaress trekked down to her mailbox in the frigid weather 'cause an important package arrived... yep, too much fun in this too-cold weather ~yuck-yowls~ ... a long, long harried day... and this Big Cat needs some shuteye now.

Curl up and enjoy your dreamtime, darling kittens. It's how we can all touch our souls, and live in other realms for a bit. Just remember, this Big Cat loves ya!
~~~~~~

The Kougar is writing Chapter Eighteen of her SHAPESHIFTER SEDUCTIONS WIP ~ Rule the Sky In My Heart ... the story has taken a somewhat unexpected turn from the original plot idea.
~~~

Happy Wednesday! Rebecca here, reassuring everyone that I am, in fact, still alive and not part of witness protection. Not much to post this week unless you want a snipet. Yes, you do want one? Ok!

Strange lights on dwarf planet Ceres have scientists perplexed
A dwarf planet is shining two bright lights at a NASA spacecraft right now, and our smartest scientists are unsure what they are. — Mashable
~~~~~~

UFOs: Red Baron shot down 'flying saucer' over the trenches
Mysteries of WWI also include an 'angel' appearing in the middle of a battle and thousands of British troops abducted by Aliens. — Mirror.co.uk
~~~~~~

The Mysterious Devil’s City of the Gobi Desert
The bizarre, twisted and surreal landscape found here is the result of what is referred to as Yadan landforms. — Mysterious Universe
~~~~~~

IT'S A TEEMING LIFE UNIVERSE 'NEWS' ~