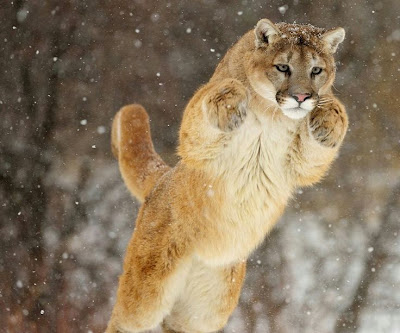 Late night mews, March-magical Big Cat Beauties... a cold, mostly overcast and gloomy day on the tame prairie... with just a touch of snow in the morning... the moon looked full and hung high, and beautiful this evening... looks like yesterday was the full moon... anyhoo and mew, what a trying time and day... and now the Kougaress no longer gets to listen to Coast to Coast am, even though she's a paying subscriber... and she's been listening for about fifteen years now... this is beyond frustrating!!! And she feels totally screwed over... you'd think they would care about having all the 'coast insider' listeners they can get... but, evidently not.

So, darling kittens, hope your life is much more fun and far less frustrating. 'Cause this Big Cat loves ya!
~~~~~~

Meeting of the Pointy Ears
by Savanna Kougar

Wow, what a hellacious day! For the sake of time, yours and mine. I won't go into details. ~but, I'm still shaking my head~

Anyway, somehow I wrote a flash scene today that I hope you enjoy.

Meeting of the Pointy Ears

Blade Runner, ET rabbit warrior, zipped through the early morning Montana skies in his scout space craft. He tested out a rudimentary device he'd been able to procure on Earth, due to Dante's always sharp lookout for such advanced tech.

To be hoppity, carrot-crunching real, it had been the AI assassin, Kalina, who discovered the Tesla-tech treasure while scanning the depths of what Earthers called the dark net. With the help of Dante's cousin, Zortega, the small ET woman had easily settled into life at the Pleasure Complex.
~~~~~~