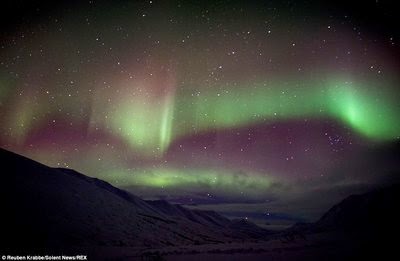 Adventurous skiers brave avalanches and -33C temperatures to ski beneath breathtaking Northern Lights show:
Photographer Reuben Krabbe, 25, and friends, skied off-piste under the spectacular natural lights display
They slalomed down the 1,500ft Tombstone Mountains in Canada in dangerous avalanche conditions
The mystical display was captured against the snow-capped mountains in a series of stunning photographs
By Becky Pemberton For Mailonline
Published: 12:22 EST, 13 March 2015 ~dailymail.co.uk/travel/travel_news/article-2993600/Adventurous-skiers-brave-avalanches-33C-temperatures-ski-breathtaking-Northern-Lights-show.html
~~~~~~

Almost midnight mews, March-marvelous Felines... cooler, and overcast for most of the day on the tame prairie... however the sun was ultra bright in the later afternoon and the sunset was a soft glowing pink... yesterday, the Kougaress disturbed one of the golden eagles on her trek back from the mailbox... and she saw one today, as well, flying low to the ground... oh, and some of her daffodils are blooming already... although last year, they bloomed earlier because of mild temps.

So, the problem with COAST TO COAST AM appears to be solved... the Kougaress feels a bit foolish... but really, it wasn't her fault, given she had ***no clue*** the Firefox browser was NOT SHOWING the Windows Player or the IPOD option to listen to the show... and NO ONE at Coast bothered to contact and say the Windows Player was still there... no, not one little peep!... nada, nothing! Okay, today this Big Cat decided to try Internet Explorer to find out if the player worked better... lo and behold, she discovered to her GREAT RELIEF that the Windows Player was available... she checked the Firefox Coast page again, and NO the Windows Player DID NOT SHOW... so, she emailed Coast feedback, and explained the problem, then reported it to Firefox... whatever... gosh, one lesson learned is: communication seems to be in the proverbial toilet... really, a lot of times basic communication simply does not exist in these times... not as it once was between people.

So, darling kittens, take care and share the best of yourself. 'Cause we all need it during these times. And remember, this Big Cat loves ya!
~~~~~~

The Kougar looked up the flash scenes she wrote that fit into Pat Cunningham's THE MOUNTAIN LION KING, a shapeshifter seductions novel Pat has written, and plans to self-publish... Pat is going to add these scenes to her book, since the flashes are part of the storyline itself, and were written when Pat first started her story with flash scenes.

Also, the Kougar signed up for the linky blog SNEAK PEEK SUNDAY ~sneak-peek-sunday.blogspot.com~ She will be featuring the first six paragraphs of Chapter Forty-four from HER MIDNIGHT STARDUST COWBOYS at SHAPESHIFTER SEDUCTIONS.
~~~

Change of Pace
by Solara

Gill slid his arm around Chloe’s waist.  The youngest of the triplets lay in the sling crisscrossing her chest.  Plagued by colic and weird eating habits, the tyke needed the TLC snuggled up to mom provided.

Most of the families snowed in with them, during the double blizzards six weeks earlier, eagerly made their way to their homes.  Vernon and Miss Elly remained ensconced in the back wing of the mansion.  Something about peace and quiet for a bit longer.  Phil and his group decided that California sounded inviting and resumed their trip.
~~~~~~

The Red Planet May Once Have Been a Blue-Green Orb Like Earth
Wednesday, March 11, 2015
This is not a morality tale about planetary preservation – and what happens if you don’t take good care of your literal ground of being. But after years of assuming that Mars is and always had been inhospitable to life, scientists at NASA are now convinced that an ocean once covered 20% of the surface of Mars. In some places, the ocean was likely a mile in depth. And according to Charles Cockell, a professor of astrobiology at Edinburgh University, “The longer water persists on a planetary body in one location, particularly if there is geological turnover, the more likely it is that it would provide a habitable environment for a suitable duration for life to either originate or proliferate. An ocean would meet this need.”
Read the original source: unknowncountry.com/news/red-planet-may-once-have-been-blue-green-orb-earth
~~~~~~

RULE OF THE HEART 'ARTICLE' ~

Weekender: Heart Smart
Friday, March 13, 2015
I’ve remembered for years one particular line from Dangerous Liaisons. In a conversation between two conniving characters, played by Glenn Close and John Malkovich, one says to the other regarding the people they’re conspiring to deceive, “They’re intellectuals and, like most intellectuals, incredibly stupid.”
... ~unknowncountry.com/news/weekender-heart-smart
~~~~~~

Mystery of our 145 'alien' genes: Scientists discover some DNA is NOT from our ancestors - and say it could change how we think about evolution ~dailymail.co.uk/sciencetech/article-2994187/Mystery-alien-genes-Scientists-discover-DNA-NOT-ancestors-say-change-think-evolution.html
~~~~~~

CHASING YOU WITH THE BIG BIRD ROBOT 'NEWS' ~

OSU researchers create fast robot modeled after birds
KGW | Researchers at Oregon State University have built a robot that’s the first of its kind. Its name is Atrias.
~~~~~~

Hyper-Sense Awareness... so, the Kougaress has become aware that her five senses have significantly heightened, sharpened... beyond even her childhood experience, or the purity of living in wonder... and no, it's not to super status *yet*... but definitely she sees colors more sharply, hears sounds more sharply, and feels more of her natural surroundings... even her sense of taste is sharper, richer... it's like an extension of her energy reaching out farther... the only term that makes sense is a hyper awareness... one that keeps growing... also, her sense of touch is richer... it's like living in altered world of the senses... so, today she listened to a radio show about Marconics on Revolution Radio ~freedomslips.com~ which did address this hyper-sense awareness as part of ascension... however, this show was after this Big Cat came to this realization... she noticed it about a month ago, then even more so a couple of days ago. ~apologies for rambling explanation, but the Kougaress is over tired~
~~~~~~