Kynthia touched a bare toe to the beautiful green... 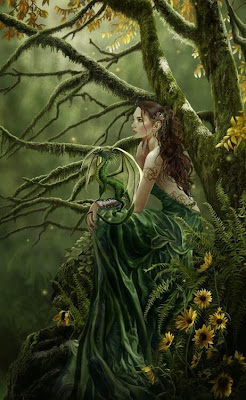 Late night mews, March-musical yowling Pussycats... chillier on the tame prairie today... but still Spring like... and the skies were a lovely blue with little white clouds until the chemtrail appeared in late morning... there were two of them that this Big Cat observed... at this point, she's so darn sick of aerial spraying... well, no, she won't reveal her private thoughts here... they aren't too nice, to say the least... so, gosh, what a crazy-manic time attempting to accomplish all that needs to be done... yep, the quickening quickens... oh, this Big Cat saw the sliver of moon before it clouded over... and today the Kougaress felt this deep, deep gratitude for the life and beauty that is Earth.

Take care and prepare, most darling kittens. The world appears to be rocking on a precipice. But life and love are what's important. And always remember, this Big Cat loves ya!
~~~~~~

A man with green-tinted skin...

Yes, I'm behind as always. Just too much busy-stuff interference these days. ~whew!~ However, I hope you enjoy this little belated nod to the wearin' of the green in our shapeshifter-supernatural town and territory.

A man with green-tinted skin...

Kynthia touched a bare toe to the beautiful green shoots emerging from a large patch of snow. She'd never known such freedom to be herself, as she now enjoyed in Talbot's Peak, Montana. After a long luxurious stretch of her entire naked body, she inhaled  huge breaths of the chilled morning air. Her lungs thanked her.

With a leap forward, she skipped down the rocky hillside, sparsely dotted by Aspen trees and pine. She headed toward a fast-running creek, sheltered by outcroppings of rock.
~~~~~~

Solar eclipse, Supermoon, Spring equinox: Friday will see three rare celestial events
London Independent | Eclipses have long been feared as bad omens, but the equinox is celebrated as a time of renewal.
~~~~~~

AMAZING... THE REAL PAST REVEALING ITSELF 'NEWS' ~

New Investigative Series Promises Amazing Findings, Filmed Denizens: Giants, Cryptids, And Their Mysterious “Gates” Are Just The Beginning, Say Authors ...Dzil Nchaa Si An, as Mount Graham is known in the Western Apache language, is one of the four holiest mountains in the world for the Apache and is considered sacred to all of the region’s native peoples. And it is so because it is what we might call a “stargate” in their mythos, a portal through which “the Star People” have come since the dawn of time... ~skywatchtv.com/2015/03/15/new-invetigative-series-promises-amazing-findings-filmed-denizens-giants-cryptids-and-their-mysterious-gates-are-just-the-beginning-say-authors~
~~~~~~

Mystery of the yeti deepens: DNA analysis reveals 'Abominable Snowman' hair does NOT belong to an unknown species of bear ~dailymail.co.uk/sciencetech/article-2997216/Mystery-yeti-deepens-DNA-analysis-reveals-Abominable-Snowman-hair-does-NOT-belong-unknown-species-bear.html~
~~~~~~

NOT A FUTURE THIS BIG CAT WANTS 'NEWS' ~

Sirius founder envisions world of cyber clones, tech med
USA TODAY | In a not-too-far-future, robotic mind-clones will accompany us to the ballot box or grocery store.
~~~~~~~

INSIDE THE EARTH 'NEWS' ~

Take a look INSIDE the Earth: Scientists eavesdrop on seismic waves to create most accurate map of planet's interior ~dailymail.co.uk/sciencetech/article-2997355/Take-look-INSIDE-Earth-Scientists-eavesdrop-seismic-waves-create-accurate-map-planet-s-interior.html~
~~~~~~