Just under the wire! 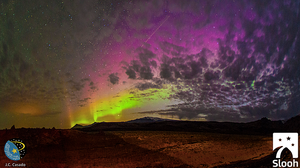 PHOTOS: Colorful Aurora Dances Across Night Skies
By Jillian MacMath, AccuWeather.com Staff Writer
March 18, 2015; 11:32 PM ET
The nighttime sky across the Northern Hemisphere was flooded with bright colors on Tuesday, as a brilliant display of the aurora borealis dipped farther south than usual.
The appearance of the northern lights follows several episodes of solar activity, including what is thought to be one of the strongest solar storms since 2013, according to the Associated Press. ~accuweather.com/en/features/trend/photos_colorful_aurora_northern_lights_borealis_australis/44108162
~~~~~~

Late night rainy mews, March-mellow snuggly Pussycats... the Kougaress has always adored color-magnificent photos of Auroral displays... it's a special celestial magic that enlivens the soul, a gift that is a reflection of the Divine... so, a gentle lovely rain on the tame prairie during the afternoon hours... and now it's raining again... a good thing for the greening land, and the flowers... so, this Big Cat is keeping on keeping on... it's about all she can do in these strange, trying times we are living through... how about you?

Cuddly hugs, darling kittens. Keep preparing for the superstorms of life. And remember, this Big Cat loves ya!
~~~~~~

Yes, the Kougar did get work on her SHAPESHIFTER SEDUCTIONS WIP... although, not enough, given everything she has to get done.
~~~

Just under the wire!
by Rebecca Gillan

Ok, posting just under the wire today. Here's another snipet from "Witch's Moon." The first two paragraphs of this bit particularly amuse me!

“How did you find me?” I asked a half hour later. We were scoping out the sugar factory, checking to see if the site really was abandoned and therefor safe to inspect. It was a nice neutral question, touching on none of the icky emotional sap that had been hovering just out of sight since our conversation a bit ago.
“Juniper bushes don’t usually go wandering around,” Mooney answered dryly, not taking the binoculars from his eyes. I clamped down on the urge to slap myself in the forehead. Yeah, kind of didn’t think about that.
~~~~~~

GOOD IDEA... TOO BAD IT'S BEING LEGISLATED INSTEAD OF SIMPLY BEING DONE NATURALLY 'NEWS' ~

France May Ban Too-Thin Models
France is expected to pass legislation to outlaw ultra-skinny fashion models, reports the CBC . The legislation now being debated would set up minimum weights based on body-mass index, a formula that would require a woman 5-foot-7 to weigh 120 pounds. And the measure wouldn't just bar such models from runways,...
~~~~~~

WATCH: Aurora Ignites Across the Northern Skies
Watch a replay of tonight's live broadcast from Iceland showcasing the beautiful, glowing aurora borealis, which has been amplified by a powerful solar storm. ~accuweather.com/en/weather-news/watch-live-icelandic-aurora-da/44016938
~~~~~~

Mysterious flash lightens night sky in south Russia (VIDEO)
An inexplicable white-and-blue flash was spotted lighting up the sky over the southern Russian city of Stavropol. A dashcam video has since triggered a heated debate over the origins of the mysterious sight.
Stavropol’s horizon offered a jaw-dropping view to those who weren’t asleep at around 00:39 local time (21.39 GMT on Monday). The soundless flash of light scared several people, as it made some streetlights in the city go out, while being accompanied by the flickering of lights inside apartments and houses.  ~rt.com/news/241629-russia-ufo-flash-light
~~~~~~