Penelope sat on the side of the bed... 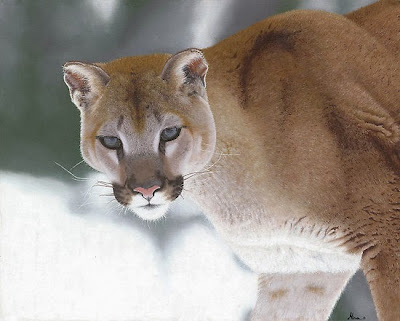 Heading toward midnight mews, March-magnificent Felines... a lovely warm day on the tame prairie... gosh, it felt good outside as the Kougar trekked down to her mailbox... and this Big Cat noticed her daffodils were poking up their first leaves, despite all the frigid, single digit temps recently... course they're buried in a deep bed of leaves, and on the south side of the house... once again, the moon was a beautiful site as she rose beside the barn this evening, starting out as a deep brilliant orange... anyhoo, it's trying time, that's for sure... and, no, the stupid player at COAST TO COAST AM still does nothing but buffer, so the Kougaress complained once again... after all, she paid for the subscription in good faith... and her Window Media Player was very reliable all these past nine years... now, she's crap out of luck, and no one seems to care at Premier... nor does customer service seem to care at Coast... so, it's all been a big fat waste of time just trying to listen to the show on the internet. ~sighs~

Stay cozy and cuddled, darling kittens. And make someone feel extra special this weekend. And remember, this Big Cat loves ya!
~~~~~~

Top to Bottom - Bottom to Top
by Serena Shay

Penelope sat on the side of the bed in her dungeon away from home at Dante’s pleasure club, stretching her cramped legs and rubbing her upper arms.  Her sweet submissive Daniel lay panting next to her.

“I’m sorry, Mistress,” he said, eyes focused downward towards the mussed up bed.  “Please let me try again.  I-I know I can do better.”
~~~

WHAT A BUNCH OF *NEUTERING MEN* MALARKEY, IN THE KOUGAR'S OPINION ~

NBA Launches Feminist Mind Control Campaign
Prison Planet.com | Alex Jones goes off on the latest feminist mind control attempt which is being pushed by the NBA.
~~~~~~

PETS ARE GOOD FOR YOU 'NEWS' ~

Simple Way to Reduce Stress for Children of Deployed Military Personnel
Dr. Becker - The study researchers, who are affiliated with the Cummings School of Veterinary Medicine at Tufts University, set out to discover whether some of the specific stressors experienced by military families could be alleviated through interaction with animals. According to Megan Mueller, Ph.D., a developmental psychologist and co-author of the study:“We found that kids with deployed parents who had developed a deep bond with a family pet reported having better coping strategies in dealing with the stress than those without such ties to a companion animal.”
~~~~~~

GUESS WHAT, TURNS OUT BIOMETRICS IS EASY TO HACK AND OVERCOME WITH HIGH RESOLUTION IMAGES ON THE INTERNET 'NEWS' ~

Hack an Iris Scanner Using Google Images!
Prison Planet.com | As the brave new world of biometrics is being rolled out, are we certain we’re not setting ourselves up for a new level of identity theft?
~~~~~~

THEN, THERE'S THE MARK OF THE BEAST 'INFO' ~

Darrin McBreen explores the coming of the Mark of the Beast. RFID microchips implanted under the skin and wearable technology (Smart Tattoos) will soon be mandatory. Meanwhile the European Union and U.S. Cybercom develop plans for a worldwide standardized... https://www.youtube.com/watch?v=YKsR50DKXwY
~~~~~~