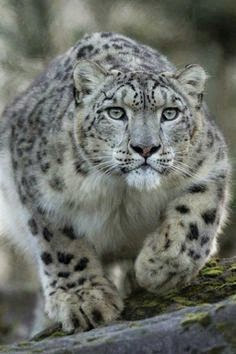 Snow Leopard on the prowl...

Friday late night mews, gorgeous and glorious Felines... hope your holidays were fabulous and continue to be wonderful... the Kougaress is already yawning 'cause it's been a long day... on Christmas day the sky was a bright beautiful blue for a change and the temps were on the warm side... at least for half a day... that was the best gift for this Big Cat... and today the temps remained mild, but the skies turned dreary gray again... then there was some gentle rain... the rain is good, but gosh all these gray days are no fun... last night the skies did clear and the crescent moon was beautiful... plus, one night this past week, this Big Cat actually saw the stars in all their bright shining glory because the night sky was clear enough.

Keep spreading the love, darling kittens, and strengthen your connection with family, friends, and all your loved ones as much as possible. This is the time of the heart. And remember, this Big Cat loves ya!
~~~~~~

The Kougar is about to write Chapter Nine of her ShapeShifter Seductions short story that will likely turn into novella. Her heroine and hero are getting naked.
~~~~~~

December 25, 2014-- In this amazing video footage, a monkey revives the life of another monkey that was electrocuted at the Kanpur train station in northern India, as a crowd of onlookers watched and took pictures.
~coasttocoastam.com/pages/monkey-saves-electrocuted-companion~
~~~~~~

PHOTOS: Snow Falls Over Rockies in Time for Christmas Morning
While many areas across the country felt a milder Christmas morning, residents across Utah, Montana and Idaho woke to snow-covered ground in time for holiday celebrations. ~accuweather.com~
~~~~~~

Mysterious Explosions and Flashes, Filmed but Still Unexplained
Occasionally, phenomenon that include lights in the sky that range from meteors, to drones buzzing overhead, are recorded by individuals quick with their camera phones. — Mysterious Universe

HEADLINE ~stevequayle.com~ The Mystery Crashes(NOISES AND BOOMS): Are They a Global Phenomenon? :Reports from around the world indicate recently that mysterious “booms”, or what are sometimes referred to as “explosions” or “sky-quakes” are being reported in various countries
~~~~~~

Mystery of Ancient Chinese Civilization's Disappearance Explained
An earthquake nearly 3,000 years ago may be the culprit in the mysterious disappearance of one of China's ancient civilizations. — LiveScience
~~~~~~

EPIGENETICS AND THE X-FILES 'NEWS' ~

Epigenetics is helping us to solve DNA mysteries that cannot be explained by genetics alone. It might even help explain some of the spooky phenomena described in the 1990s science documentary series The X-Files … ~theguardian.com/science/occams-corner/2014/dec/11/epigenetics-xfiles
~~~~~~

NASA IS GOOD FOR SOMETHING OTHER THAN BEING A BIG FAT FACADE FOR THE CURRENT, HIDDEN SPACE FLEET CIVILIZATION 'NEWS' ~

NASA’s Best Images of Earth From Space in 2014
Includes shots of a volcano erupting on a newly born island, tornado tracks across the Great Plains, and the aurora borealis above Russia. — Wired
~~~~~~

THE ONLY REASON WE DON'T HAVE THIS *BACK TO THE FUTURE* TECH IS BECAUSE IT'S BEEN SUPPRESSED... THANK YOU VERY MUCH, CORP CREEPAZOIDS 'NEWS' ~

Four 2015 Energy Ideas 'Back to the Future' Got (Almost) Right

Hoverboards, flying cars, and auto-fueling are closer than you think, and garbage energy is here. — National Geographic News
~~~~~~

HEADLINE ~stevequayle.com~ Could 2015 be the year of domestic robots and 3D printed food? Futurologist claims technology has reached a 'tipping point'
~~~~~~