Reetha stepped from the woods... 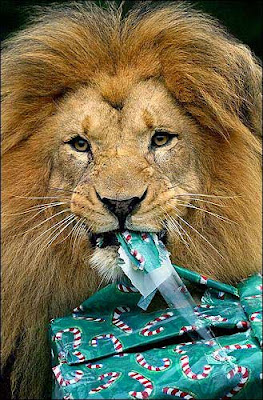 Late night mews, holiday hugging Big Cat Beauties... another mostly gray but milder temp day on the tame prairie... the short days and this not much light thing is no fun... anyhoo, on her trek down to the mailbox, she startled a couple of squirrels... on of them dashed down this tree not thirty feet away... he spun and darted toward this Big Cat for a few steps... realized his error, sat up briefly with this oh-no expression on his face, and did a fast about turn scampering down the drive... it was like a comedy routine, and yep the Kougaress laughed at Mr. Squirrel.

So, take care, darling kittens, and get some extra shut eye. Lots charging down the pike at us. And remember, this Big Cat loves ya!
~~~~~~

The Kougar made some good progress on her sex-passion scene despite the ultra busy day she had... she wishes the title would show up of her current WIP... nothing quite fits yet.

Reetha stepped from the woods behind her brother’s house, readjusted her scarf, and made sure her fly was zipped before she made her way to the door.  She was done waiting for an invite to meet her new niece and nephew.  The male child, being beta and all, needed his auntie’s cuddles and the little alpha lady needed to catch the scent of the other alpha bitches in her circle.  There were so few female alpha wolves out there, so this group needed to be tight.  She and Ziva knew the loneliness that came from being female alphas in a male-centric world. Between her mama and auntie this girl would rise high and never be alone.
~~~~~~

YES, THEY HAD AIRPLANES AND MORE 'NEWS' ~

REMEMBER, GET PREPARED AS BEST AS POSSIBLE 'NEWS' ~

Get Prepared: 122 Of The Best Prepper Websites On The Internet
Michael Snyder | Getting prepared for the chaos that is coming to America in the years ahead is not that complicated. ~prisonplanet.com/get-prepared-122-of-the-best-prepper-websites-on-the-internet.html
~~~~~~