There Shall Be Rejoicing... 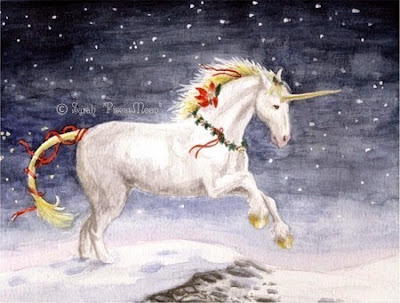 Nighttime mews, holiday happening Big Cat Beauties... drizzly-rainy-dreary on the tame prairie today, and chilly... but not frigid, thank the Divine... and it's supposed to be warming up, yay to that!... so the Kougaress didn't make the trek down to her mailbox... by the time she could get enough time, it was close to dark and the rain was falling harder... and on top of that she was too physically worn out... not so much mentally tired, though.

Stay cozy and cuddled, darling kittens, and spread the love. Lots of strangeness on the way. And remember, this Big Cat loves ya!
~~~~~~

The Kougar is still writing away on her short holiday story... she likes how it's going so far... and wishes yet again, she had more writing time.

Also, this Big Cat author might try out another promo linky blog, called Hot For Friday at the Book Boyfriends Cafe ~bookboyfriendscafe.com~
~~~

And There Shall Be Rejoicing In The Halls!
by Rebecca Gillan

“Mom, why is everybody acting all crazy?” Thor asked as he watched people literally bouncing off the walls of the school. Marissa had been called to the school to come pick the boys up due some of the kids picking fights with her boys. And no, she was not buying the principal’s line that Loki and Thor were the instigators. But Loki, for all his small stature, had a smart mouth, a hair trigger temper and a young  alpha wolf’s disinclination to take shit from anyone. It didn’t take much to get him fighting, just like it didn’t take much to get his uncle Nick fighting.
~~~~~~

Airline Changes Flight Following 'Psychic' Warning
The Brazilian airline TAM recently changed the flight number of one of its planes based on a prediction by a self-proclaimed psychic that the flight was doomed. — Discovery News
~~~~~~

Nibiru Incoming! – “Something Is Really Strange" (video)
CONTRIBUTOR: The Vatic Project. Vatic Note: Wow, this is a must listen to radio program on Hagmann and Hagmann where they are interviewing Bob Fletcher about Nibiru and for the first time, after hearing this interview..... I believe they are onto something here. You listen and then look at the photos we lifted off...
~~~~~~

Project Camelot: Mike Harris: Syrian Briefing On ET Presence (video)
CONTRIBUTOR: James Rathey. Mike Harris and a small team from Veterans Today ( http://veteranstoday.com ) attended a conference in Syria recently to discuss combatting terrorism and religious extremism. Attended by delegations from 36 countries this conference was unprecedented in it ambitious goal to bring together nations and their peoples to understand the playing...
~~~~~~

THE SPOOKY BLACK-EYED KIDS ... RUN AWAY FROM THEM 'NEWS' ~

HEADLINE ~stevequayle.com~ In this episode, Timothy Alberino analyzes the Black Eyed Kids phenomenon sweeping the globe. Is it just an urban legend?... An internet mythos?... Pop culture sensationalism?... Or is it real?
~~~~~~

Real-life 'Eye of Sauron' will open up over Moscow skyscraper tower ~rt.com/news/212527-eye-sauron-moscow-scyscraper~
~~~~~~