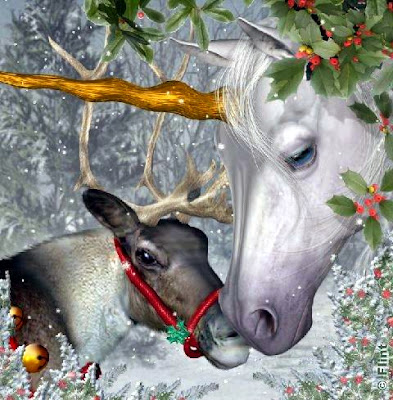 Late night mews, holiday enchanting Kittens... serious winds last night along with winter-temps cold, and the snow might be moving in... the sun did peek out from the clouds in the late afternoon, and actual blue skies could be seen between a successive layers of clouds... so, it wasn't as dreary a day on the tame prairie... the Kougaress must say the squirrels are having a grand time thumping down on the roof, then running madly across it... so, this Big Cat is continuing to improve healthwise after her couple of days bout with some sort of nasty crud that wanted to take hold... for which, she is very grateful.

Spread the holiday cheer, darling kittens, and stay on the alert. More superstorms of life headed our way. Just remember, this Big Cat loves ya!
~~~~~~

Drev paused in his stride, and like a dirty dog, he roamed his gaze over Keina's delicate shape as she stood before his book collection. The round swell of her hips from her small waist caused his swollen cock to lurch.

Down humping dawg, he ordered. Yeah, no hope there. Drev grimaced at himself, and before stepping inside the room, he glued his gaze to his unexpected guest's gorgeous little ass.

Even with Keina's petite frame, her curves were voluptuous, her thighs shapely, and, thank the good lord above, not pencil thin. What he wouldn't give... Drev hammered the rest of that thought into nonexistence.
~~~~~~

ANTARCTICA, NOT A FROZEN WASTELAND 'NEWS' ~

Is this Antarctica's 'Neverland'? Ghostly landscape found beneath the ice where the land doesn't age and water flows UPHILL ~dailymail.co.uk/sciencetech/article-2874839/Scientists-explore-Antarctica-s-ghost-mountains-ice-cap-land-does-not-age-water-flows-uphill.html
~~~~~~

The Year in Bigfoot
Two states led the nation in Sasquatch sightings, which have been on the decline since surging in the '00s. — CityLab
~~~~~~

WE DON'T EVEN KNOW HOW TO BE HUMAN AND NOW WE HAVE TO DEAL WITH ANDROIDS ... WHY CAN'T WE JUST HAVE ROSIE THE ROBOTS FIRST? 'NEWS' ~

'Athena' is the first humanoid robot to be a paying airline passenger
It remains to be seen if Athena is the kind of passenger you'll want to sit next to, but at least on this flight it sounds like it'll be flanked by scientists instead of normal jet-setters. — The Verge
~~~~~~

B-MOVIES, LIFE ON OTHER PLANETS 'NEWS' ~

The ultimate B-movie guide to life on other planets
What’s the solar system really like? You won’t find out from watching these. — Boston Globe
~~~~~~

What did ancient Babylonian songs sound like? Something like this
Stef Conner’s album 'The Flood' is probably the first ever to be sung in ancient Sumerian and Babylonian. — Newsweek
~~~~~~

BEING CONTROLLED BY YOUR SENSE OF SMELL 'NEWS' ~

Olfactory engineering - How corporations control your thoughts, moods and actions through smell
(NaturalNews) It is a fact that smells affect the way we think and process information. Studies have shown that odors trigger all sorts of cognitive changes in humans, and can be used by corporations or the government to influence populations and even...
~~~~~~

Health Ranger update: the revolution of open-source grassroots inventions
(NaturalNews) As Natural News fans and readers know, I'm working hard on a series of inventions to be released in 2015 that will revolutionize preparedness and self-reliance globally. These are all 100% off-grid inventions that require no power to operate... ~naturalnews.com/047919_Health_Ranger_inventions_3D_printing.html
~~~~~~