Oh yeah, Rudolph, you'll go down in my history... 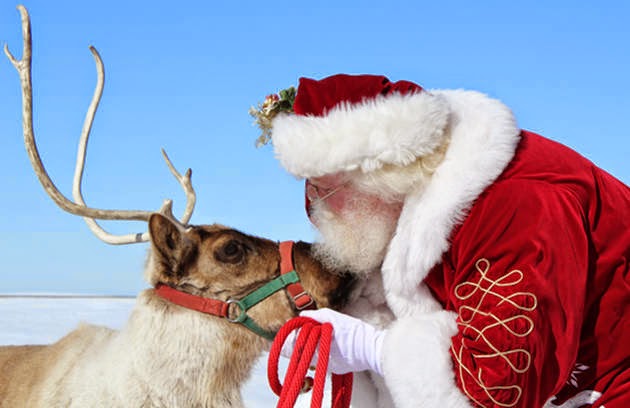 Late night mews, holiday high Kittens... gently raining on the tame prairie now... this morning there were actual blue skies for a time... then the clouds began moving in... still, the temps are not that bad... and today on her trek back from the mailbox the Kougaress saw a tiny Dandelion that had bloomed... certainly she's never seen a Dandelion at this time of year before... so, wow!

Have a wonderful Christmas Eve day, most darling kittens. Spread the LOVE 'cause this Big Cat loves ya!
~~~~~~

Oh yeah, Rudolph, you'll go down in my history...
By Savanna Kougar

"Empty as a glass of rum egg nog at Duff McDuff's tavern," Satriani muttered under her breath. She stuffed her gloved hands deeper into her pockets and continued her *looking at the Christmas lights* stroll through the neighborhoods surrounding her little cozy nest of a house.

She'd had her fill of the spectacular extravaganzas on previous nights, appreciating the ostentatious blasts of colored flashing lights and over-the-top creative designs. But tonight, her bleak mood directed her footsteps to those houses that had been simply yet lovingly decorated by the shapeshifter and supernatural families in Talbot's Peak.

Hearing tires on frigid asphalt, Satriana halted and half-turned. The SUV slowly progressed down the street. Recognizing Louie's ride, and what appeared to be Mayor Gil sitting beside the owner of Rattigan's, she gave a wave.
~~~

10 Quick Reasons to Love Chocolate
NaturalSociety - Many overly processed chocolates are full of refined sugar and saturated fatty acids, but the real stuff is packed full of plant derived flavanols, full of antioxidants, anti-inflammatory constituents and health-boosting ingredients that do all sorts of amazing things for our bodies and minds. ~naturalsociety.com/10-reasons-you-gotta-love-chocolate~
~~~~~~

AFTER THE APOCALYPSE 'NEWS' ~

How We'd Feed Ourselves After The Apocalypse
What would we eat in the event of global catastrophe? Two researchers have come up with the answers and let’s just say that it involves plenty of bacterial slime and rats. — Gizmodo
~~~~~~

NO THANKS TO GOOFLE'S SELF-DRIVING CAR 'NEWS' ~

Google's 'goofy' new self-driving car a sign of things to come
Google unveiled its first "fully functional" prototype for its own self-driving car Monday and plans to test it on Bay Area public roads in the new year. — San Jose Mercury News
~~~~~~

THE MYSTERIES OF THE MIND 'NEWS' ~

Barber woke from coma speaking fluent French and thinking he was Matthew McConaughey
Car crash victim Rory Curtis, 25, says the accident he was involved in changed his outlook on life, after he realized he wasn't a Hollywood actor. — The Telegraph
~~~~~~

Our Top 20 Works of Fabulous Fiction to Inspire Self-Reliant, Liberty-Loving Children and Teens
The Organic Prepper - My kids are total bookworms, so I enlisted their help to compile this list of favorites. Some folks may pooh-pooh the idea of fiction as a teaching tool, but reading about a character who is smart, adaptable, self-reliant, and skilled can influence the way your child or teenager thinks. These books are not all specific to kids in prepper families – many of them are just tales of kids who are put into situations in which they must rely on their wits and courage to survive, while others outline the dangers of too much government.
~theorganicprepper.ca/our-top-20-works-of-fabulous-fiction-to-inspire-self-reliant-liberty-loving-children-and-teens-12202014
~~~~~~