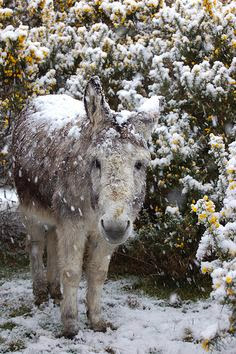 The Kougaress adores donkeys... they are so cute.

Early morning mews, winter fantasy Kittens... turning nasty cold on the tame prairie ... yeah, who needs that stupid polar vortex, anyway? ... yesterday, as dusk descended, the Kougaress saw a herd of deer peacefully grazing in her eastern pasture... it was so wonderfully cool because that's the first herd she's ever seen... there was one buck and four or five does, and one that looked like a half-grown doe... they are so beautiful... so, a lovely blue sky today even with the clouds, but snow could be on the way later in the week... okay then, New Year's Eve is almost here, but no resolutions for this Big Cat... she gave those up a LONG time ago.

Wishing you the bestest New Year ever, darling kittens. Stay cozy-cuddled and keep spreading the love. And remember, this Big Cat loves ya!
~~~~~~

Another Monday promo day for this Big Cat author... plus writing the 2015 Angelic Forecast was a challenge, as usual.

Soft growls mingled with murmured words and breathless gasps in the dark. Stefanya arched and writhed beneath her lover. A gyrfalcon shifter, she needed the feel and freedom of air against her back. She allowed no man to top her, except those she trusted completely. Over the two years of their association Yuri had won that privilege, and more.
~~~~~~

Nessie Review of 2014
Roland Watson looks back at the past year in Loch Ness Monster news. — Loch Ness Mystery
~~~~~~

The Craziest Sci-Fi Fantasies That Got Closer to Reality This Year
Swimming micro-robots, a Navy laser cannon, and the first commercial dog cloning company are amongst the futuristic developments which occurred in 2014. — Wired
~~~~~~

Venus Gets Weirder: CO2 Oceans May Have Covered Surface
Surprising new research suggests that Venus was once covered with oceans of carbon dioxide fluid. — Space.com
~~~~~~

SHEESH, TALK ABOUT AN ADDICTION 'NEWS' ~

Awake, Online, And Sleep-Deprived – The Rise Of The Teenage 'Vamper'
An unsettling new trend sees teenagers surreptitiously spending hours a night texting rather than sleeping. — io9.com
~~~~~~