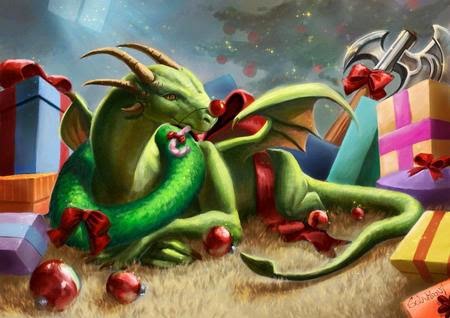 Late night mews, holiday hugging Big Cat Beauties... the rains came last night, and the creek bed at the end of the Kougaress's drive is nicely filled up... today on the tame prairie the winds whipped raindrops around... the skies stayed mostly cloudy and gray, of course... yep, the temps are dropping again... a grueling day of doing all the necessary stuff like winterizing the house more... at least, the Kougaress is feeling much better, and mostly over the crud sick stuff... but she is definitely ready to get some sleep.

A promo manic day for this Big Cat author... although, it wasn't all authorly business... the whole day was manic-getting-stuff done.

Happy Humpy Holidays
by Pat Cunningham
“Sing it, baby! Lizzy Hale and Halestorm, with ‘Love Bites.’ Ain’t it always the way? No, you didn’t oversleep. This is Tabbs and Fuzzy of the Morning Hair Ball, 105.7 SHFT in Talbot’s Peak, coming to you live from Dante’s for the pre-holiday free-for-all. How’s it going on your end, Fuzzy?”

“Oh yeah, that’s right, you’re a married wolf now. Gotta buy gifts for the jackal clan. You went all the way down to the exit, didn’t you? How was it?”

December 15, 2014
Ancient Egypt: Alien Artifacts Could Rewrite Egyptian History
By Susan Duclos
Fascinating and remarkable ancient artifacts have been discovered in a former home of Sir William Petrie in Jerusalem which could totally rewrite Egyptian history. These artifacts shown in the video below include relics and remains of what appear to be "aliens," but it is unclear if Petrie was hiding this knowledge or was waiting to reveal these artifacts after he had researched them more but died before his research was complete.
One object described as an "alien device of some kind," is a plate-sized "disk object"  allegedly made out of gold, has a sealed transparent top and outside there are mysterious symbols that do not appear to be Egyptian in origin. The device is clearly technology far advanced from what the people of tht time were capable of.  ~allnewspipeline.com/Ancient_Egypt_Alien_Artifacts_Discovered.php~
~~~~~~

THE ROBOTS ARE HERE 'NEWS' ~

Why Japan has bet its revival on humanoid robots
Japan loves robots and if the Japanese government gets its way, that love could spark a revolution. — SFGate.com
~~~~~~

The bracelet that turns your arm into a touchscreen
Wearers of the of the Cicret bracelet will be able to check an email or watch a film that's projected into their forearms. — Mail Online
~~~~~~

IT'S A STRANGE, STRANGE WORLD 'NEWS' ~