The wolf shifters are having... 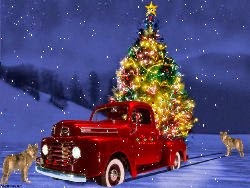 The wolf shifters are having a bit of fun in Talbot's Peak. Let There Be Lights at SHAPESHIFTER SEDUCTIONS ~
Late night mews, holiday bright Kittens... wow, another two gray dreary days on the tame prairie... however, a gentle rain fell today, which is a good thing... so, the shortest day of the year has just passed, also known as the Winter Solstice... whatever vibes were going on, they were chaotic for the Kougaress... fortunately, today is much calmer with no strange happenings... anyhoo, this Big Cat couldn't make it down to her mailbox today... she ran out of time getting everything done, and it turned too dark and rainy too early.
Stay winter cozy and cuddled, darling Kittens, and enjoy the holiday season. Always remember this Big Cat loves ya!
~~~~~~

Ah, the manic Monday promo day for this Big Cat author... and so it goes.
The Kougar penned Volcano's Weekly Angelic Forecast... which is posted at Kougar Kisses below, and at these two sites ~ sirenbookstrand.blogspot.com & ~ titlemagic.blogspot.com ~
~~~

Let There Be Lights
by Pat Cunningham

“Louie,” Gil said, the strain to remain patient evident in his voice, “tell me again why I’m doing this.”

“How would you know? You’ve only lived here a couple of years.”

“I still been here longer’n you.” Louie maneuvered his SUV slowly up and down the Peak’s streets. He viewed the houses on the left, Gil those on the right. “C’mon. It’s the highlight of the year for some’a these people. Lookit this one. Nice, huh?”
~~~~~~

The Year's "Strangest" Meteor Shower to Radiate Near the North Star
As the skies darken Monday night, stargazers will have the chance to witness the streaking glow of the Ursid Meteor Shower, which will radiate from near Polaris. ~accuweather.com~
~~~~~~

Stonehenge discovery could rewrite British pre-history
The most important discovery at Stonehenge for a generation could be destroyed by David Cameron's plan to build a tunnel at the World Heritage Site. — The Telegraph
~~~~~~

YOUR OWN DIAMOND ROCK 'NEWS' ~

Strange Rock from Russia Contains 30,000 Diamonds
The sparkly chunk was pulled from Russia's huge Udachnaya diamond mine and donated to science. — LiveScience
~~~~~~

THE GIANT PAST REVEALING ITSELF 'NEWS' ~

Legends and America's Giant Skeletons
In the search for evidence that giant existed, some have looked to the large mounds of the American Midwest, some to the massive and mysterious structures of the Middle East. — Epoch Times
~~~~~~

The Strange Tale of a New Species of Lizard
The lizard was produced in the laboratory by mating two other species, and its creation defies conventional ideas about how new species evolve. — NY Times
~~~~~~

Here's What Yellowstone's Thermal Springs Looked Like Before Humans Visited
Before Yellowstone opened its doors to millions as a national park in 1872, the pool was actually a clear, brilliant blue. — weather.com
~~~~~~

Is String Theory About to Unravel?
Evidence that the universe is made of strings has been elusive for 30 years, but the theory's mathematical insights continue to have an alluring pull. — Smithsonian.com
~~~~~~

6 Advanced Ancient Inventions Beyond Modern Understanding
Our ancestors of thousands of years ago are still able to baffle us with their ingenuity and discoveries. ~theepochtimes.com/n3/1149292-6-advanced-ancient-inventions-beyond-modern-understanding~
~~~~~~

CONTAMINATED ORNAMENTS, TOYS... BE CAREFUL, SHOPPERS 'NEWS' ~
Christmas ornaments, children's toys found to be heavily contaminated with toxic chemicals, heavy metals
(NaturalNews) 'Tis the season to be leery. Experts have issued a series of warnings about several holiday decorations and children's toys which have been found to be heavily contaminated with heavy metals and toxic chemicals. Unfortunately, the items...
~~~~~~

HEADLINE ~stevequayle.com~ Coast To Coast Internet Outages Now Being Reported - Has It Begun? Or, Are These Just 'More Tests'?
~~~~~~