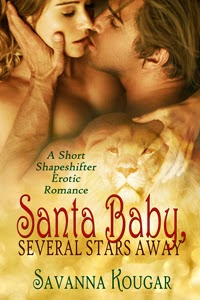 Here's the first meeting between my heroine, Kaily, and her hero, Dylan.
~~~

Oh, help. She'd done it now—stepped into a stinky pile of trouble she had no clue how to get out of.

Shut up, she told her runaway thoughts.

When he finally approached the archway into the parlor, his steps were so quiet Kaily barely heard them. She squeezed her eyelids hard. Unless there was some sort of Christmas miracle, she'd never be able to open them again.

Holy moly, if his gaze censured her, she didn't want to see it, especially since he looked like Santa Clause.

To everyone's surprise, even Nessie had politely directed Dylan to the books and movies that would teach him how to play jolly St. Nick for the children.

''Is this a holiday tradition I'm not aware of?"

The deep timbre of his voice blanketed her like velvet, yet did little to warm Kaily. Frightened, so much more than she bargained for, Kaily could only hear her drumming heartbeat.

As if he willed it...or, as if she'd just received her Christmas miracle, Kaily's eyes opened of their own volition.

His arms were folded like some arrogant king who observed her from afar. It struck her odd in the next instant that he actually expected a real answer to his question...judging by his expression.

Where it came from Kaily would never know...but in the following moment she heard herself croon, ''Santa baby, waitin' just for you.

Something flashed in his eyes, white-hot, powerful as a lightning strike. Kaily completely stilled. She watched him as if he were a hunter, and she was the rabbit in his sights.

In the following instants, she realized he meant her no harm. Intense and somehow majestic, his gaze covered her body like his voice had—making her insides icy fire with anticipation.

For more of Hot for Friday ~bookboyfriendscafe.com~
~~~~~~

~~~ Kaily and Dylan invite you to read their love story ~~~

The problem for Kaily: No one really knows anything about Dylan's past or where he came from. With her attraction to him growing day by day, she becomes a driven woman. On a desperate whim, she gives herself to him as a Christmas present. Will Dylan be able to resist her waiting naked, but gift-wrapped beneath his tree?
~~~