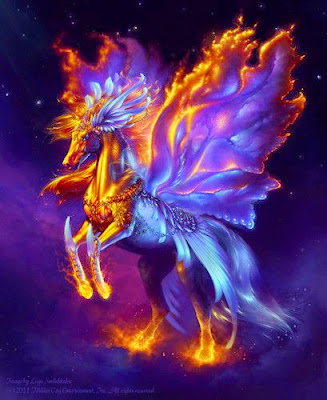 Late morning mews, new year mystical and magickal Kitkats... another brrr-cold morning on the tame prairie... first thing the Kougaress saw a large male cardinal outside her window in the bare-limbed maple tree... and flocks of small birds live in the fir trees along her long drive... and another madcap-busy day yesterday... but onward and upward.

Curl up and cuddle up, most darling kittens. Now is the time to discover who loves you the most, and those you love the most. And remember, this Big Cat loves ya!
~~~~~~

Keina soared on wings of sheer bliss.
By Savanna Kougar

Here's a draft of Chapter Ten from my current ShapeShifter Seductions WIP, which is tentatively titled: His Invisible Gift. However, that doesn't seem quite right, so the title is likely to change. Anyway, Keina, my winged horse heroine, and Drev, my hero, who is human but has enhanced abilities... have just enjoyed a very hot sex scene.

Keina soared on wings of sheer bliss. "Stud, my stud," she whispered over and over. She hugged Drev's neck, and pressed herself even closer to the shield of muscle that was his chest. His potent sexual scent filled her nostrils. The strength of his cock still filled her, and his grip on her hadn't weakened.

Long moments later as they continued hugging each other, as her afterglow shimmered every fiber of her, Keina murmured, "You can put me down, Drev."

"Clean sheets," he tempted. The rough timbre of his voice tickled her ear deliciously.
~~~~~~

The Hellish Monster Flew
Like so many other villages in the ancient county of Devon, England, Widecombe-in-the-Moor has a curious history attached to it. — Mysterious Universe
~~~~~~

Rare shark birth captured on camera
A remarkable photograph of the live birth of a thresher shark has cast light on the lives of these elusive, vulnerable fish.  — BBC News
~~~~~~

THE GRUESOME FUTURE IS HERE 'NEWS' ~