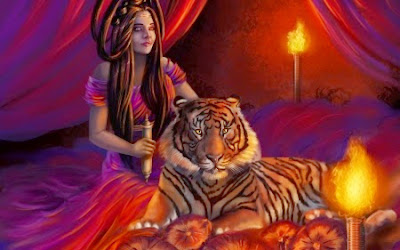 Afternoon frigid mews, new year never-never land Kittens... so, the Kougaress forgot to post her bloggie this morning... way too many other things happening, including her flash-scene post at SHAPESHIFTER SEDUCTIONS... thus and so, it was a bitterly cold night on the tame prairie... however, the sun is out for a change, and warming up the land.

All blessing to you and yours, darling kittens, and stay warm. 'Cause this Big Cat loves ya!
~~~~~~

Q and A
by Pat Cunningham

Sanjay led an unresisting Serenity away from the rowdy ruckus of the bachelor auction and over to a booth at the wall. From here they could still watch the action while remaining apart from it. It created an odd sensation: intimacy in the midst of a crowd. Whoever had designed the club this way, the owner had definitely gotten the most bang out of his buck.

That thought caused Serenity’s nerves to rear up and swamp her again. In spite of the number of people here, she was now, for all intents and purposes, alone with a total stranger. In fact, scratch the whole “people” label. The “people” here were shapeshifters, liable to turn into some kind of animal at a moment’s notice. Present company included.
~~~~~~

In conjunction with her appearance on the 1/11/2015 edition of the program, researcher Leslie Mitts ~timestreampictures.com/lycandroids-information.html~ shared a number of images related to her research into Lycandroids, bipedal wolfen hybrids that stand over seven feet tall, walk on their hind legs, and possess the strength of ten strong adult human males. ~coasttocoastam.com/pages/leslie-mitts-images~

The 9 Greatest Monsters in North America
The Beast of Bladenboro, Michigan's Dogman, and the Wampus Cat are amongst the creatures chronicled. — io9.com

Exotic Animals and a Weird Agenda
Nick Redfern shares tales of out of place animals reported in the United Kingdom. — Mysterious Universe
~~~~~~

Mysterious booms rattle homes in Oklahoma
Scientists have been attempting to determine what has been causing the spate of unexplained explosions. — Unexplained Mysteries
~~~~~~

Scientists and investors warn on AI
Financial Times | “Because of the great potential of AI, it is important to research how to reap its benefits while avoiding potential pitfalls…”
~~~~~~

2015's 'Leap Second' Could Scramble Computers
Due to Earth's slowing rotation, one second must be added to June 30th in order to keep atomic clocks accurate. — LiveScience
~~~~~~

Jet stream blasts plane across Atlantic in record time
Boeing 777 reported at speeds of up to 745mph as it flies from New York to Heathrow in just 5 hours 16 minutes. — The Telegraph
~~~~~~

Come for the giant rock, stay for the UFO history
George Van Tassel believed he could communicate with aliens. — Smithsonian.com
~~~~~~

Virtual reality enters a new dimension
New technologies are pushing ultra-convincing virtual realities out of the realm of science fiction and into the now. — Discovery News
~~~~~~

Is this Britain's most haunted shop?
Footage shows medium visiting shop to investigate haunting reports only to witness skull picture fall from a shelf. — Mirror.co.uk
~~~~~~

MY QUEENDOM FOR A REAL MAN 'NEWS' ~