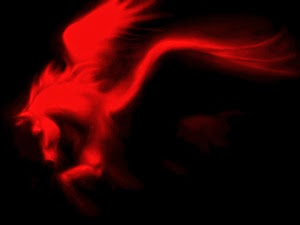 Nighttime mews, new year snappy happy Big Cat Beauties... cooler on the tame prairie today... on her trek down to the mailbox the Kougaress disturbed two large flocks of birds, and on the way back she  saw a small, red-tailed hawk flying low over the neighbor's field... she hasn't seen one of those critters for a long while now... so, another rather maddening day of getting necessary stuff done... and gosh, at this point it feels as though the year, 2014, simply disappeared... and 2015 is already speeding past.

Okay, darling kittens, hang onto your sanity, and stay tuned to your spiritual center, 'cause the world is flying apart. Just remember, this Big Cat loves ya!
~~~~~~

So, the Kougar did get some more done on her SHAPESHIFTER SEDUCTIONS WIP... but the day turned against her... argh!
~~~~~~

The Creepy Saga of a Diabolical Devil
Around the end of the 19th Century, a strange creature was killed, placed in a glass case, and displayed in the Blue Gate pub on Rolfe Street. — Mysterious Universe
~~~~~~

FACEBOOK TIGHTENS THE NOOSE OF CENSORSHIP ... AND THE MAYOR OF BOSTON USURPS FREEDOM OF SPEECH 'NEWS' ~

Freedom of Speech? Boston Mayor Bans Bad Mouthing of Olympics, as Facebook Will Filter Out “Fake News”
Michael Krieger | Apparently the First Amendment doesn’t apply to the Mayor of Boston.
~~~~~~

For Heaven's Sake, If You're That Scared, Don't Be a Cop ... really, this is just sickening... the Kougaress heard this Video... mygawd! If you're that terrified in that kind of situation DEFINITELY DO NOT be a cop... there was absolutely NO REASON for this man to have been killed, or even threatened in this manner... this Big Cat has been in several comparable situations during her life, and instinctively remained cool and calm... hysteria creates hysteria... that situation could have been easily handled by remaining calm... the man was obviously NO THREAT to those cops.

HEADLINE-SNIPPET: "Video of Unarmed Black Man with Hands Up Killed, Shot Six Times by NJ Cops
Sputnik | New Jersey police have released a video of two police officers shooting and killing a black man as he tried to get out of a car with his hands up."
~~~~~~