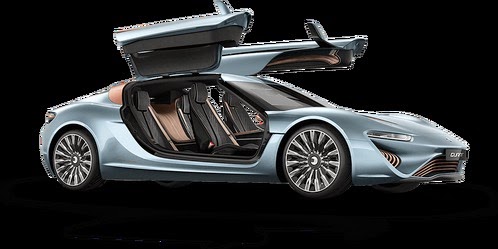 Meet the Quant e-Sportlimousine... mere peasants like this Big Cat need not apply... but holy yowl, the Kougaress would love to climb inside this baby, and head out on the highway... oh yeah purr, she'd let the speed lover inside her have its way.

Electric Car Powered by Salt Water: 920 hp, 373 Miles/Tank
It’s finally here folks and it is LEGIT.
Tesla eat your heart out, the Germans have created an electrical car powered by salt water. It has four electric engines and is FAST with some pretty sweet fuel economy for a sports car. Leave the Bugatti at home and stop by the beach to refuel.
~aetherforce.com/electric-car-powered-by-salt-water-920-hp-373-milestank~
~~~~~~

Late night mews, new year rambunctious and ready Kitkats... unseasonably, wonderfully warm on the tame prairie today... and tonight the over half-moon his almost directly overhead and so amazingly bright... wow, the birds are so busy flying about and singing-chirping, beyond what the Kougaress has observed in years past... anyhoo, just another over-busy day for this Big Cat.

So, darling kittens, keep the claws at the ready, and an eye peeled. The times they are a changin' super-fast. Just remember, this Big Cat loves ya!
~~~~~~

The Kougar got a bit done on her ShapeShifter Seductions WIP... plus other authorly stuff... and she tried out a new blog hop yesterday called PARANORMAL LOVES WEDNESDAYS, posting at TITLE MAGIC ~titlemagic.blogspot.com~
~~~~~~

Zombie Cat: Buried Kitty Believed Dead, Meows Back to Life
A cat in Florida that was hit by a car and then buried is apparently back from the dead. — ABC News
~~~~~~

The AI Revolution: The Road to Superintelligence ~waitbutwhy.com/2015/01/artificial-intelligence-revolution-1.html~

Who Will Survive the Robot Takeover?
Prison Planet.com | Lee Ann McAdoo talks to Dr. Stuart Russell about the threat posed by artificial intelligence.

Huis Ten Bosch theme park to get hotel staffed by robots
Japan Times | A hotel with robot staff and face recognition instead of room keys will open this summer.
~~~~~~